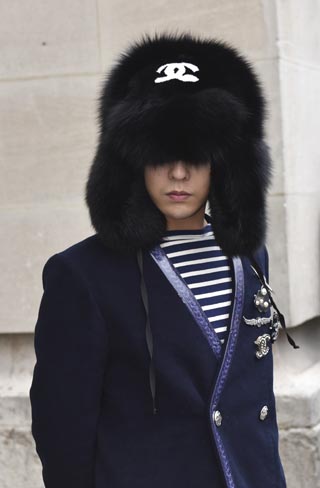 PARIS - A relaxed Gwyneth Paltrow looked very much the part as she arrived at Chanel’s “atmosphere of calm’’ eco-show inside Paris’ Grand Palais.

A huge “mood’’ garden decor - replete with a relaxation pond, forest and grass - greeted the 43-year-old Oscar-winner Paltrow, who posed for cameras in a check Chanel skirt suit with high collar near some steps leading up to a minimalist wooden hut.

It was so realistic there was even a small swarm of flies buzzing around on the verdant lawn - and with it, Lagerfeld may possibly have created the world’s first couture ecosystem. 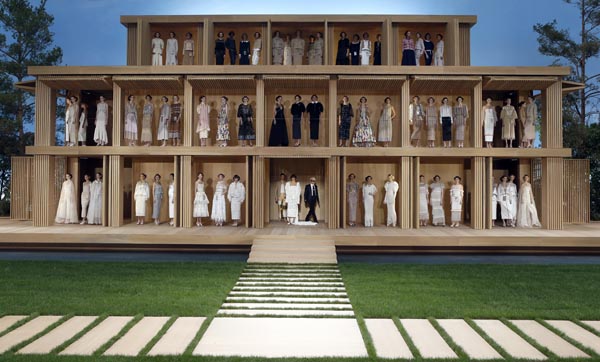 This curved aesthetic - apparent also in oversize bulbous chignons, curved cork platforms and unusual double-eye makeup - was inspired by the 1932 cubist sculpture “Head of a Woman’’ by Pablo Picasso.

But this was at times a very contemporary collection - with assorted iPhone pockets hanging loosely from the models’ waists.

The eveningwear was somewhat more enchanted - with strapless dresses or pants with a train complemented by painted capes with rhinestones, wide-cut boleros or embroidered jackets. There were fairy-like touches - like a pale pink silk gown, with Tinkerbell-like zigzags cut into a tiered skirt and large diaphanous cuffs. A glimmering cape in lame and chiffon on model-of-the-minute Gigi Hadid also added to the magical vibe.

Couture is not the industry most readily associated with ecology. But if it’s up to Lagerfeld, whose latest passion is the garden, things may well be about to change.

Aside from the show decor, all the jewelry and embroideries in the 75 Chanel looks were made from wood shavings, paper and straw.

They were, of course, given a Chanel-style makeover: fastidiously painted, treated and molded by the atelier into exquisite shapes and paillettes that resembled white feathers and flower petals.

“Ecology is something that’s never been used in high luxury before,’’ explained the couturier - who then had trouble with the traditional concept of conservation.

“Bees are an endangered species, so I took a load of them and stuck them on the dresses,’’ he quipped, referring to what one press spokesman quickly clarified as being merely bee-style embroideries.

Lagerfeld also didn’t miss the opportunity to distance himself from the wider eco-fight: most eco-fighters, he said, “don’t take care of their appearance.’’

Among the other collections, Armani’s timeless couture show was as if washed with water - attended by stars Iggy Azalea, Charlotte Rampling and Juliette Binoche.

Wave-like ruffles graced dark pants, a blouse resembled a shellfish, and a pale purple embroidered jumpsuit conjured the silhouette and scaly texture of a mermaid.

But at times, the aesthetic came across as a tad repetitive. AP