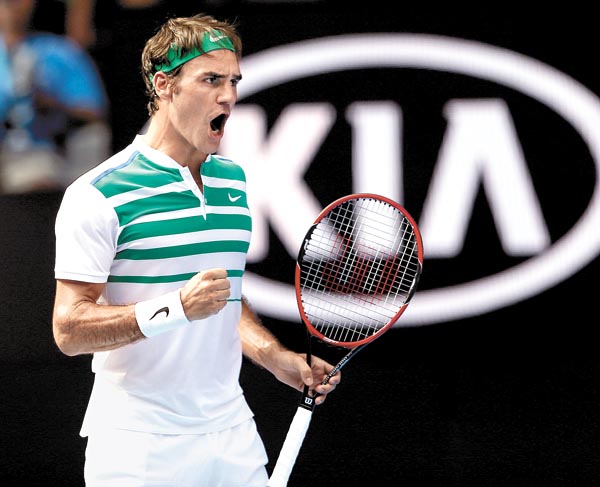 Roger Federer reacts during the quarterfinal against Tomas Berdych at the Australian Open, Tuesday. [XINHUA/NEWSIS]

MELBOURNE, Australia - Novak Djokovic has a larger than life presence at the Australian Open.

His face smiles at fans from sponsor’s billboards. His voice gives inspirational advice over center-court speakers between matches.

There’s even a new addition to Melbourne Park called “Novak’s World,” where fans can slip on virtual reality goggles and feel as if they’re walking in Djokovic’s shoes - as he stretches in the locker room and then walks out onto the court as the crowd roars.

A few years ago, the Australian Open and the other majors could have been called “Roger’s World” - when Roger Federer was No. 1, still dominating men’s tennis and the favorite face of sponsors. 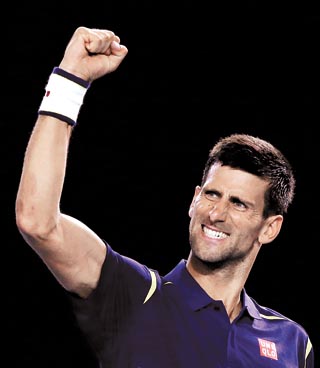 Novak Djokovic celebrates after defeating Kei Nishikori in their quarterfinal at the Australian Open, Tuesday. [AP/NEWSIS]

The top-ranked Djokovic will play No. 3 Federer in a blockbuster semifinal match at the Australian Open. It will be the 45th installment in a riveting rivalry that is so equally split that they are tied with 22 wins each.

It’s a rematch of last year’s final at the U.S. Open and Wimbledon, both of which Djokovic won in thrilling nail-biters.

It will be their 15th matchup at a Grand Slam tournament, more than any other pair of men in tennis’ Open era, which dates to 1968. Djokovic and Rafael Nadal have played each other 13 times at majors, Federer and Nadal 11 and John McEnroe and Ivan Lendl 10.

But more than just numbers, it is a tantalizing rematch that holds great importance to both players as they try to cement their place in history.

For Federer, who owns a record 17 Grand Slam titles, it offers a chance to prove that his best is not entirely behind him. He is 34, which means that time really is running out.

That is true, but the problem for Federer has been making it happen in the last round of a major.

The 28-year-old Djokovic finished 2015 as the No. 1 player for the fourth time in five years. The Serb won three Grand Slams - the Australian Open, Wimbledon and the U.S. Open - and reached the final at the French Open.

Djokovic is considered the best baseliner in the game, contorting his body as he stretches and slides between defense and offense.

In Melbourne, Federer has been playing a brilliant brand of attacking tennis, ushering him comfortably through the draw and past No. 6 Tomas Berdych 7-6 (4), 6-2, 6-4.

“This is going to be a big challenge for both of us,” Djokovic said. “I’m expecting a great fight.” AP