Apple rakes in profits but worries about 2016

Apple rakes in profits but worries about 2016 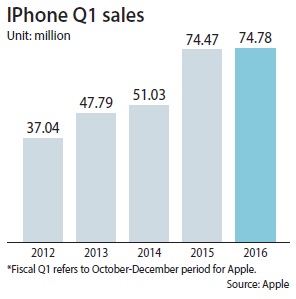 Apple posted its largest quarterly profit of $18.4 billion in the final three months of last year but came up with a grim outlook for the current year, saying sales will fall for the first time in 13 years due to the tough global environment.

The iPhone producer said in an earnings report Wednesday that it raked in record-high revenues of $75.87 billion in the last three months of 2015, the first quarter of its 2016 fiscal year, falling slightly short of a consensus estimate by Thomson Reuters of $76.54 billion. The company, which released the iPhone 6s and 6s Plus last September, also posted record quarterly net income of $18.4 billion, the most ever made by a public company.

In the January-March period of this year revenue is expected at between $50 billion and $53 billion, a decline from the $58 billion a year ago and the first predicted year-on-year decline in sales since the second quarter of fiscal 2003.

The revenue forecast is in a “wider range than usual,” said Maestri, in a conference call, “because of the uncertainty of international markets,” referring to Brazil and Russia. The global economy is significantly weaker than it was a year ago and March will be the most difficult quarter of the year, he added.

Flat growth of iPhone sales and tumbling revenue may signal the end of a glorious era of ever-expanding horizons for the Cupertino, California-based giant. Smartphones losing steam will inevitably deal a blow to Apple, which saw the iPhone contribute 68 percent of its total revenue in the first quarter of fiscal 2016.

Cook said iPhone unit sales are expected to drop in the current quarter although he said he wasn’t worried about the iPhone market reaching a saturation point. Nikkei reported early this month Apple was expected to reduce production of its latest iPhone models by about 30 percent in the January-March quarter due to growing inventories.

“While Apple had a relatively good quarter in terms of overall revenue performance, it’s clear that weakening demand for iPhones will impact the company in the coming years,” said Brian Blau, an analyst with market researcher Gartner.

Apple, Samsung and other smartphone producers must deal with the reality that consumers are no longer racing to purchase the latest smartphones as they once did - largely due to a dearth of new, must-have features.

“We are witnessing a shift to basic phones in the smartphone market,” said Roberta Cozza, another researcher for Gartner in a Jan. 20 report. “Users are also opting to replace within the basic smartphone category without necessarily moving to high-end smartphones, especially in China.”

Market researcher IDC predicted a slowdown in smartphone shipments in 2015 as China, a crucial market for both Apple and Samsung, follow North America and Western Europe’s paths to become mature markets. Apple ranked No. 3 in China’s smartphone market after Huawei, the world’s third largest player, and Xiaomi in 2015. Samsung, once the top smartphone vendor in China, fell to the fourth spot.

Smartphone shipments are estimated to have grown 10.4 percent in 2015 from a year earlier, tapering off from 27.5 percent year-on-year growth in 2014, according to IDC.

The situation at Apple’s archrival Samsung Electronics isn’t too optimistic either. The world’s No. 1 smartphone producer said in an earnings guidance on Jan. 8 that its estimated revenue for the October-December period edged up 0.5 percent on year to 53 trillion won ($44 billion) and its operating income of 6.1 trillion won missed a forecast of 6.57 trillion won compiled by capital market information provider WISEfn. Samsung is scheduled to disclose its results today.

Analysts estimate Samsung sold around 80 million smartphones worldwide in the quarter ending December last year, down from 84 million in the previous quarter.

Samsung is increasingly reliant on phones costing $200 or less. As of the third quarter last year, such phones accounted for as much as 38 percent of all smartphone sales in terms of volume at Samsung, meaning the smartphone business is growing less profitable.