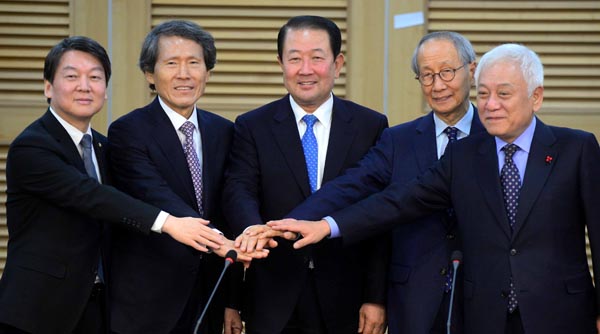 A veteran lawmaker with strong ties to the Jeolla region has joined Ahn Cheol-soo’s new political group People’s Party, solidifying its strength in the run-up to April’s general election.

Rep. Park Joo-sun joined the People’s Party on Monday to become its 17th lawmaker. He held a press conference to announce his decision, accompanied by Ahn and other senior officials of the new party. Rep. Kim Han-gill, who brokered the deal, was also present.

“I believe this move will be the starting point for creating a new political party that can realize the spirit and values inherent in the Constitution and a party that is capable of winning the presidency,” Park said.

He added that he believed in the People’s Party’s success if the voters in Gwangju and North and South Jeolla, known as the Honam region, were united with the country’s moderate reformists, including Ahn.

Park, a three-term lawmaker representing Gwangju Dong District, left the main opposition New Politics Alliance for Democracy (NPAD), the predecessor of the Minjoo Party, in September. He was the first sitting lawmaker to abandon the largest opposition party in protest over Chairman Moon Jae-in’s leadership.

He was also considered a key associate of the late President Kim Dae-jung and served in the Kim Blue House as a legal affairs secretary from 1998 to 1999.

Honam voters are largely sentimental toward the late president, and the People’s Party has steadily worked to bolster its influence there by recruiting key politicians from the region. Chun Jung-bae, a five-term lawmaker from Gwangju, joined Ahn’s political experiment earlier this week.

Park won his first seat as lawmaker in 2000 after running as an independent and subsequently joined Kim’s Millennium Democratic Party (MDP), one of the predecessors to the NPAD.

Ahead of the general election in 2004, he was convicted of bribery charges and sentenced to prison. He ended up leaving the party and running as an independent, operating his campaign while he was incarcerated.

Despite losing, he returned to the MDP after being acquitted in a final appeal.

In 2012, Park left the party again after a member of his campaign committed suicide amid speculation that the primary had been rigged. After the party decided not to nominate a candidate for the Gwangju Dong District, Park ran as an independent, won and returned to the NPAD in 2014, only to abandon it last year.

With Park’s support, the People’s Party is now just three lawmakers shy of forming a negotiation bloc in the National Assembly, which can negotiate legislative calendars and receive state subsidies.

“We talked with Park for a long time about joining forces,” Rep. Kim Han-gill said, stressing that Park’s recruitment was not an abrupt decision.

Park’s entry into the People’s Party has since increased speculation that it will be able to attract more politicians based in Honam, such as former South Jeolla Governor Park Joon-yung.

“For the sake of bringing about new politics, we must work together in one political party,” Park said. “I will play an adhesive role in the People’s Party.”

On Monday, the People’s Party also apologized for the controversy that arose over an Ahn associate’s secret recording of a private conversation between Ahn and Lee Hee-ho, 93, the widow of former President Kim Dae-jung.

Ahn paid Lee a visit earlier this month at her home in Donggyo-dong, western Seoul, to mark the New Year. Following their meeting, an Ahn aide told the JoongAng Ilbo that the software tycoon-turned-politician had effectively won Lee’s endorsement.

However, the youngest son of the late president denied that his mother had thrown her support behind Ahn. The Monthly JoongAng subsequently reported a part of a transcript of their 20-minute conversation, which raised questions about whether Ahn had exaggerated Lee’s remarks and the fact that his aide had made an illegal recording.

“An unacceptable thing happened,” said Rep. Choi Won-sik, a spokesman for the People’s Party. “It was seriously disrespectful to Lee, and we have apologized to her. We offer a serious apology.”

He added that the aide who made the recording would be fired.

Ahn visited Lee again on Monday morning at a ward in Severance Hospital, where she was hospitalized Sunday after falling and fracturing her hip bone.

Their meeting was private.