The fight to improve the ULD’s standing

The fight to improve the ULD’s standing 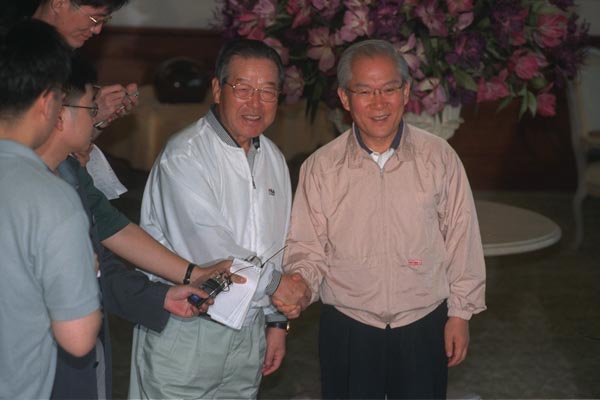 Kim Jong-pil, left, shakes hands with Lee Hoi-chang, the chairman of the Grand National Party, at a golf club in Gyeonggi on July 22, 2000. [JOONGANG PHOTO]

The United Liberal Democrats (ULD), the party that I founded, experienced a crushing defeat in the 2000 general election, winning just 17 parliamentary seats.

I tried to calm my mind with advice given to me by former U.S. President Harry S. Truman, who told me a story of a tiger during my visit to his house in 1964.

“You may think a tiger is tame, and even feel grateful for the zoo keeper as he feeds him and looks after him every day,” he said. “But to think so is nonsense. If a zoo keeper steps on the tiger’s foot by mistake, the tiger will jump him and try to bite. If a politician thinks of his people as the tiger and forms his politics accordingly, he will inevitably succeed in his political career.” 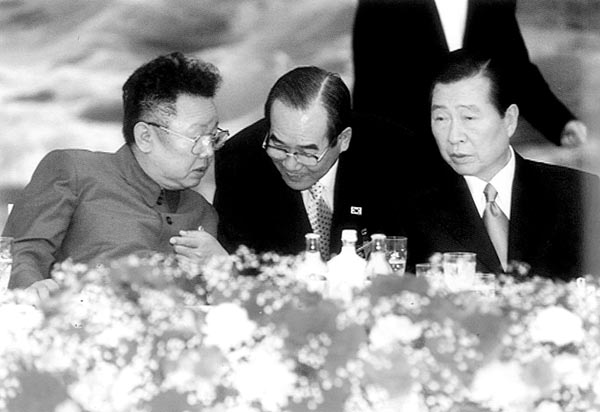 I almost felt as though I had lost the election because I had forgotten this bit of wisdom. I was ready to embrace defeat and learn from my mistakes. When a man begins a political journey, he will consistently confront obstacles as well as opportunities. Looking at it that way, I was determined to lead my party at its lowest point.

The ULD was three seats short of being entitled to negotiation rights within the Assembly; it requires at least 20 seats to hold status as a negotiating power.

But as I looked for ways to empower the ULD, a few members of the opposition Grand National Party (GNP) ridiculed me, joking that I was still hungry for power even in my 70s. But that didn’t stop me from trying to advance the status of the ULD.

To do so, a revision in the National Assembly Act to reduce the required number of seats for negotiation rights was essential. But the GNP ignored my plans for the revision.

Then one day, Lee Hoi-chang, the GNP chairman, contacted me and said he wanted to meet. His request for meeting came after former President Kim Young-sam had advised him to help the ULD win negotiation rights to form a political alliance.

On June 22, 2000, I met Lee at a golf club in Yongin, Gyeonggi, where our talk only lasted about eight minutes. I asked him to reduce the number of required seats necessary for a negotiation bloc by three, to officially make it 17.

“I can’t decide on that matter unilaterally,” Lee said, “but I’ll consult with my fellow party members to come up with a decision.”

So I waited weeks and weeks, but with no word. I had no choice but to disclose our conversation.

Lee flatly denied that we had talked.

But knowing he was a devout Catholic, I countered, “God knows that we had talked about revising the Assembly Act, no matter how much he denies it.”

Lee may have still been upset over his defeat to President Kim Dae-jung in the 1997 election due to my alliance with his camp. But denying our discussion to get back at me would have been nonsensical.

A bill to revise the Assembly Act was passed through a parliamentary committee but was blocked by the opposition GNP to be put for a vote in the plenary session. I had to rely on the ruling Democratic Party to fulfill the 20-member requirement, and accept three DP members.

In January 2001, I had dinner with President Kim Dae-jung and the first lady at the Blue House, where we agreed to rebuild the so-called DJP alliance.

But in our political coalition, we soon faced a bumpy road.

Trouble began when a few members of the South Korean delegation to Pyongyang visited a memorial for North Korea founder Kim Il Sung. Their irresponsible actions resulted in strong backlash in the South, and the GNP submitted a motion to dismiss Unification Minister Lim Dong-won, who had organized the trip.

I kept a close watch on Lim, especially when he accompanied President Kim Dae-jung as head of the National Intelligence Service to Pyongyang in June 2000 for the first inter-Korean summit with North Korean leader Kim Jong-il.

Lim whispered into Kim Jong-il’s ear, and even offered a toast during dinner. As director of South Korea’s intelligence agency, his actions were completely inappropriate. I was convinced he did not deserve to run an organization committed to safeguarding the country against North Korean threats.

I demanded on multiple occasions that the president dismiss Lim, but he remained firm in his refusal to sack him. But the ULD cooperated with the opposition GNP to oust Lim, passing a motion to dismiss him via the Assembly vote. The ULD’s participation in the dismissal in cooperation with the GNP led to the breakdown of my political alliance with President Kim.

The race for the presidency began in early 2002, and Lee Hoi-chang, head of the GNP, was on his second bid. In the ruling Democratic Party primary, Roh Moo-hyun defeated Rhee In-je for the nomination, riding on strong public popularity.

In mid-October 2002, GNP Chairman Suh Chung-won asked me to meet with him, later asking that I endorse Lee.

On Nov. 1, I paid my respects at the memorial altar set up for Lee’s father. Lee, the ruling party candidate, thanked me briefly but did not try to converse. While he visited the people who had paid their respects to his late father and expressed his gratitude, he only bothered to call me on the phone.

I felt that he wasn’t willing to ask for my political support in his campaign.

And in the end, he was defeated for the second time by Roh by the margin of 570,000 votes, or 2.3 percentage points. I was told later that many members in the GNP had lamented that Lee would have won the election had he sought my endorsement.

I met him in February 2015 when he came to pay his respects at the funeral for my wife, Young-ok.

I asked him, “You once had a grand vision for the country; you wanted to be elected president, and yet you missed your chance. How do you feel about that now?”

But on his way home, he told reporters, “After all, politics is just like a dream of fleeting glory.”

When I heard that, I thought to myself, “Politics is empty work.”