Under-23 team ‘must win’ against Japan

Under-23 team ‘must win’ against Japan 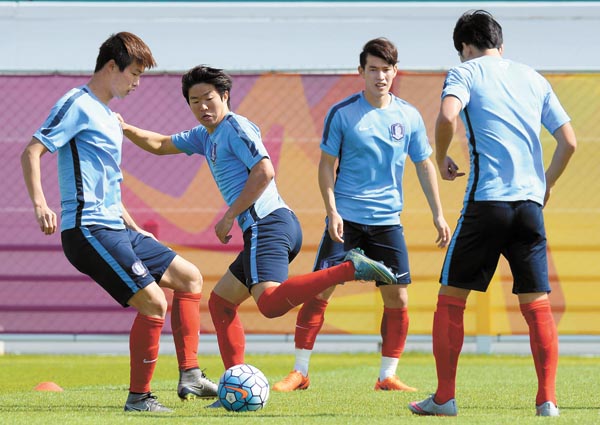 Korea Under-23 men’s football team players train in Doha on Thursday. The team faces Japan on Saturday in the AFC U-23 Championship final. [NEWSIS]

Although the tickets to the 2016 Summer Olympic Games have been booked, Korea U-23 men’s football team coach Shin Tae-yong says his boys are still focused on taking down archrival Japan in their upcoming championship match.

Korea clinched its eighth consecutive appearance to the Olympics on Wednesday (Korean time) after beating Qatar 3-1 in the semifinals of the Asian Football Confederation U-23 Championship, which also serves as the regional qualifiers for the Summer Games in Rio de Janeiro this August.

As the top three teams earn their berth to Brazil, Korea is automatically qualified for the Summer Games regardless of the result in the final, but coach Shin said that the team can’t spare a loss because it is a match against Japan. The two East Asian nations will clash on Saturday night in Doha.

“I haven’t lost to Japan in my career,” Shin said to reporters on Thursday. “There is no need to say anything about the Korea-Japan match. We must win and we will do our best - by any means necessary - to win.” 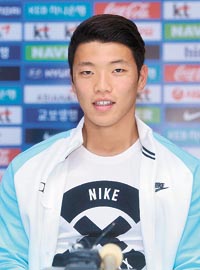 Korea’s most noticeable victory was in the 2012 London Olympic Games, where it blanked Japan 2-0 to win the bronze medal thanks to goals from Park Chu-young and Koo Ja-cheol.

In this tournament, Japan is the only team that has won every match. The young Samurai Blue reached the final by beating Iraq 2-1, thanks to Riki Harakawa’s goal in the second half stoppage time. Jamaican-born Musashi Suzuki and Yuya Kubo, who plays for Switzerland’s BSC Young Boys, are considered threats.

But what really concerns Korea is the absence of striker Hwang Hee-chan. The 19-year-old can’t play in the final because he has to return to his club Red Bull Salzburg. According to the Korea Football Association, Salzburg and the association had an agreement to send back Hwang if Korea qualified for the Olympics.

Since the tournament is not organized by FIFA, the Austrian club is not obligated to send their players for the competition.

Hwang has been pivotal player for Korea throughout this tournament. Though he didn’t score a single goal, he set up three goals for others with his powerful penetration. The highlight of his performance was in the semifinals against Qatar, when he passed three defenders in a 70-meter run and set up Moon Chang-jin’s goal.

Hwang said after the semifinals that he wants to beat Japan because of the unresolved tension between the two countries surrounding historical issues like the so-called comfort women, and later expressed his regret that he had to leave the team early.

“I’m sad that I couldn’t be with the team until the end,” he said. “But I believe we will win the championship.”

Shin said that despite Hwang’s absence, his team is confident in its ability to defeat Japan. Kim Hyun is expected to step in for Hwang, after he showed an impressive performance against Qatar that took advantage of his 1.9-meter height.

The 45-year-old coach has been using various formations in this tournament, from 4-4-2 to 3-4-3. Shin said he will analyze Japan’s matches against Iraq and Iran to come up with the best tactics for a win.

“Among the formations that we showed, we will use the best one against Japan,” Shin said. “How to play the game is important, but what really matters is the result, and that’s what we are focusing on.”

Meanwhile, with Korea and Japan punching their tickets to the Olympics, 14 out of 16 slots are already filled for the Summer Games.