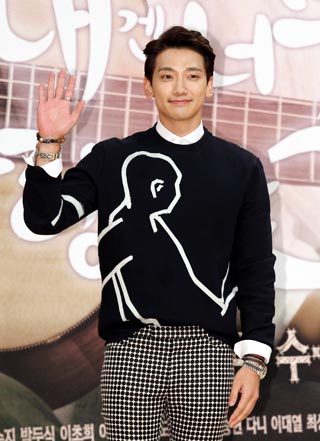 Singer-actor Rain will hold a concert in Hong Kong on Saturday.

The concert is the seventh show in his concert tour titled “The Squall.”

“Fans in Hong Kong have been waiting for his concert for a long time,” Rain Company, the 34-year-old entertainer’s agency, said in a press release on Thursday. “Concert tickets are all sold out,”

Rain began his concert tour in November. The first stop was in Changsha, China, followed by five other cities in China.

“Rain’s Shanghai concert was broadcast live through an Internet channel in China, and he was recently invited by pianist Lang Lang to perform together at the pianist’s concert called ‘Lang Lang & Friends Spring Music Festival,’” his agency said.

The agency added that Rain will focus on his acting career after the Hong Kong show, with plans to appear on the upcoming drama series “Please Come Back, Mister.”

The drama series will begin airing on Feb. 24 on SBS.

In the new project, Rain plays the role of Lee Hae-jun, who is resurrected from death.

The cast is a stellar list of actors and actresses, including Lee Min-jung, who is returning to the small screen after giving birth to a baby boy last year, and Lee Honey of “Shine or Go Crazy” (2015).