This TV star has nothing to hide

This TV star has nothing to hide 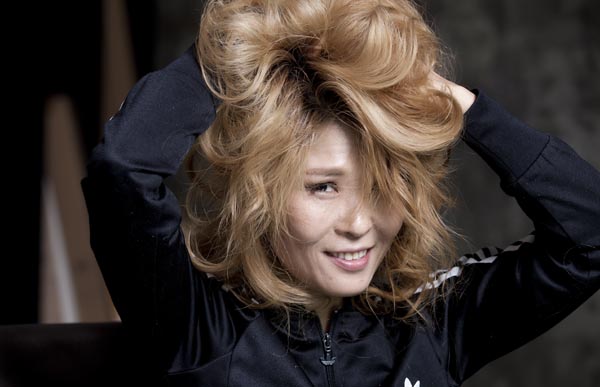 Hwang Suk-jung recently appeared in the reality show “I Live Alone,” in which she revealed her personal life. [KWON HYUK-JAE]


Hwang Suk-jung did not act like a typical Korean actress trying to be humble during her interview.

“Elementary school kids tell me I look like a cute witch,” she said. “Ajumma [middle-aged women] say I help relieve their stress, and ajussi [middle-aged men] welcome me because I am not picky.”

“Everyone likes me,” she added, laughing.

Last year, people were drawn in by her bizarre energy in the megahit drama “She was Pretty” (2015), in which she played the editor-in-chief of a fashion magazine with avant-garde outfits and ever-changing hair styles.

But her appearance was totally different in the reality show “I Live Alone.” Hwang, 45, revealed her daily life to an extent even non-celebrities would hesitate to show: She was seen crouching down while showering in a small bathroom and showing her bare face with sleep still in her eyes.

Hwang studied traditional Korean music at Seoul National University, majoring in the pipe. However, she got into acting during college and went to Korea National University of the Arts to study theater. She acted mostly in plays but has also appeared on screen since 2001.

Her life is either black or white - mundane decisions do not exist for her. It is also full of unexpectedness. She has surpassed the limits that people set for her and laughed out loud triumphantly. She was the same in the interview - she was just the same person we saw on TV.

Q. Do you have a grasp on your popularity these days?

A. Frankly speaking, I don’t review all of my television programs, but people take pictures of me and hug me whenever I go to restaurants. They like me maybe because they are attracted to my easygoing, or even poor-looking, lifestyle despite the fact that I am an actress. I’m not sure why people like me so much, but I am grateful for it.

How did you make a strong impression in the drama “Misaeng” in such a short period of time? (She had a small role as a financial department chief at a trading company.)

I had been playing roles such as swindlers, resident spies and others that were very tough. I was once an actress specialized in playing North Korean defectors. I believe that not a single person in the world is 100 percent bad, and this is my philosophy for acting.

Even swindlers are warm-hearted in some sense, and a person who is very kind may sometimes turn mean. I also got a lot of attention for my hot body, seen from the back, in the drama “Misaeng,” but it wasn’t actually me - it was a stand-in. You’d do better not to look at my naked body (laughs).

What do you think about the fact that you got so much attention for the reality show “I Live Alone”?

I promised to myself that I wouldn’t lie. Lies don’t last for long. I am not used to glamorizing myself. I also wanted to fight against prejudice. For example, people say that women should always be clean. They say one should become gentle as one gets older and men should be strong. I think it doesn’t make sense at all. There is nothing wrong with women who laugh out loud. Women also watch pornography. There are still plenty of things to be angry at even when you get older. People just keep it to themselves. It is nice to be patient, but I am not willing to follow every custom that may actually be twisted or wrong. I want to tear down every irrational prejudice.

Have you always played tough roles?

I look strong even if I try to act moderately. Such rough roles come to me, on the other hand. I have not been treated well as an actress so far. People often told me, “Your life will be harsh because of your appearance.” As long as I got a role, which was a rare opportunity for me, I had to do it perfectly. My desperateness could have come through in my acting.

How did you become an actress?

I was in a university drama club. Actually, I am most happy when I’m playing a musical instrument alone. In contrast, it was hard for me to act because it required mingling with other people. It was as if I was disclosing my selfishness to the world. For some reason, however, it was addictive. I went to a street drama company [Hanyang Repertoire] in Daehangno before I properly graduated from school. I made food there and hung up 1,000 posters every day. Then, in 1995, I re-entered college, which was Korea National University of the Arts.

You seem to have been born as an actress, weren’t you?

People say my acting is very natural, but it came from the tremendous effort I put in. As you may know, I wasn’t born into an affluent household. I wasn’t loved by my family. All I could learn from my childhood were things like, “Money speaks” or “Don’t ever trust boys,” so I had a negative perspective on the world. However, I had to express what love was while acting; I thought it was just impossible.

How did you overcome your life as an unknown actress for 20 years?

Of course, I suffered from self-pity as I saw people get prizes, make a fortune and marry rich men. The fact that they were not that different from me made me sad. I do not want to console myself, but one thing I realize is that those people also have their own troubles in their lives. We do not know about their difficulties, and we don’t care about them. We just compare ourselves with others without thinking about their hardships in life. Thus, I have been trying hard to concentrate on myself and find out what I really want.

Can you tell us about the play “Come to See Me,” which opened this month at Myeongdong Theater?

It is an original version of the movie “Memories of Murder” (2003). Directed by Kwang-lim Kim, the play stars original members of its premiere performance: Kim Roe-ha, Kwon Hye-hyo, Yoo Yeon-su, Ryu Tae-ho, etc. They got older, but they behave the same as in the past. They try their best… it’s one of the reasons I like them a lot.