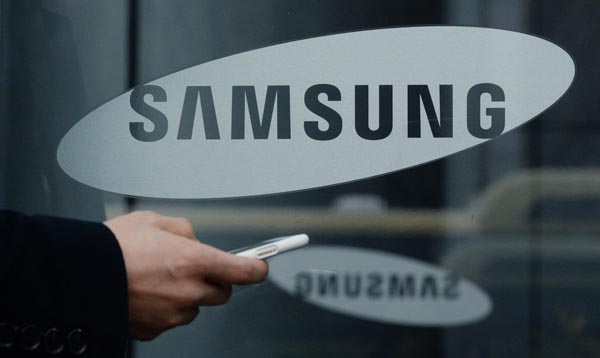 Samsung Electronics said in an earnings report on Thursday that while semiconductors’ share in operating profit leapt from 34.7 percent in 2014 to 48.43 percent in 2015, mobile phones’ piece of the pie tumbled by almost 20 percent over the same period to 38.4 percent. [JOONGANG ILBO]

The tech giant said it plans to beef up its small and midsize smartphone and high-end semiconductor sectors, as well as new business areas such as the Internet of Things, to address the slowing global demand for IT products.

Samsung Electronics’ revenue for the October-December period totaled 53.32 trillion won, up 1.1 percent year on year, and the company registered revenue of 200.65 trillion won for the full fiscal year of 2015, down 3 percent from a year earlier.

Although the company managed to maintain the 200 trillion won range for a fourth straight year, revenue has been on a downward spiral since peaking at 228.69 trillion won in 2013, when its most successful smartphones, the Galaxy S4 and Galaxy Note 4, swept markets across the globe. Operating profit totaled 26.41 trillion won in 2015 after rising 5.5 percent year on year. 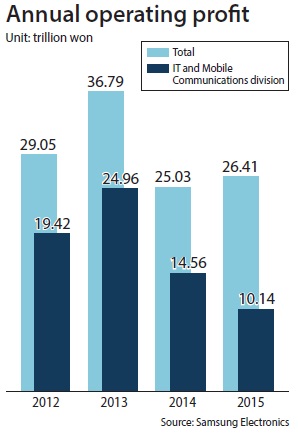 But operating profit for the last three months of 2015 fell from 7.39 trillion won to 6.14 trillion won. The company blamed the worldwide economic downturn, including the sharp fall in oil prices, for the decline.

“The components side of the business was impacted by weakened prices of DRAM chips and LCD panels due to overall softer demand in the IT market and personal computers,” the company said.

Still, chips have replaced smartphones as the most important profit source for the world’s No. 1 memory chip and smartphone producer, as the contribution of semiconductors in annual operating profit surpassed mobile phones in 2015.

Semiconductor executives said on Thursday that the company would concentrate on shifting to next-generation production technology by taking advantage of transistors as small as 10 nanometers. That way, the company hopes to slash production costs.

“Operating income in the semiconductor division fell short of the forecast at nearly the 3 trillion won range due to the sluggish performance of memory chips,” said Greg Roh, head of research at HMC Investment Securities.

He expects profit to continue shrinking during the first three months of the year and anticipates gradual recovery after the second quarter, when the next flagship smartphone Galaxy S7 will have gone on sale across the globe. Still, “meaningful recovery” is barely foreseen, he added.

Samsung said it expects single-digit percentage growth in both the smartphone and tablet categories amid softening demand and intensifying competition. The forecast came after Apple said in an earnings report that it expects to see the first quarterly drop in revenue in the January-March period for this year, citing slowing sales of iPhones.

In the January-March period of this year, Apple’s revenue is expected to be between $50 billion and $53 billion, a decline from $58 billion a year ago and the first predicted year-on-year decline in sales since the second quarter of the 2003 fiscal year.

“While the entire smartphone market is weak in terms of growth, the mid- to low-end segment is where there’s more growth, relatively speaking,” said Lee Kyeong-tae, the company’s Internet and mobile communications division executive.

By rolling out new editions of its existing lines of budget phones such as the Galaxy A, it should be able to increase the number of shipments and profitability. Stepping up its software capability, in addition to hardware, services and wearable products is another breakthrough area Samsung has in mind.

Asked when the company plans to launch smartphones with the next-generation “foldable” screen, Samsung’s display unit executive only said its development is going smoothly, without elaborating further.

Announcing that it would give out year-end dividends of 20,000 won per share (20,050 won per preferred share), up from 19,500 won at the end of 2014, Samsung vowed to come up with additional shareholder returns in the latter half of the year “in spite of the ever-challenging situation ahead.”

Shares of Samsung Electronics tumbled 2.6 percent to close at 1,145,000 on Thursday.