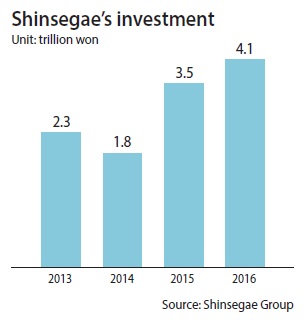 The company will also revamp existing facilities and improve logistical systems for its online mall.

The planned investment is the highest in the retail group’s history, 17.1 percent more than last year’s 3.5 trillion won.

“Retailers faced headwinds last year due to the falling domestic demand, but for this year we hope that the investment spent on multipurpose shopping malls, department stores and duty-free shops will bear fruit,” said the vice chairman.

“As a retailer closely linked with the domestic market, Shinsegae will try to contribute to the local economy and find a new growth engine,” he said.

Of the 4.1 trillion won investment, some 1 trillion won will be used to build a large multipurpose shopping complex in Hanam, Gyeonggi. The 118,000-square-meter (1,270,141-square-feet) venue will house shopping outlets, restaurants, movie theaters, a concert hall and an exhibition center. It is due to open in the latter half of this year.

The plan to merge shopping and entertaining facilities into the complex came as more people want to enjoy various activities at a single location to save time.

Chairman Chung said, “Department stores have to focus on creating a living and cultural space where, along with shopping, entertainment and other experiences are provided together,” he said during a groundbreaking ceremony in 2013.

Following Union Square, Shinsegae plans to build massive shopping malls in the metropolitan area near Seoul including Goyang and Anseong in Gyeonggi, Incheon and Daejeon.

As for the E-Mart discount chain, Chung’s primary focus is for the chain to develop its own products and break into overseas markets.

E-Mart, the country’s top discount chain, has pulled together resources to increase the range of its private-brand lineups such as No Brand.

In the latest move, the company established a task force headed by Chung to develop various items and focus on featuring its own brand of products.

As the discount chain opened its first store in Vietnam last year, some of the investment will fund localization and service improvements at the new overseas store.

Another business focus lies in its online mall SSG.COM and affiliated payment system called SSG Pay as the growing number of people purchase goods online and via mobile devices.

To build up its appeal, the group will spend 150 billion won to build a new shipping center that caters to its online mall in Gimpo, Gyeonggi.

With the logistics center serving the online mall, Shinsegae can promise faster delivery.

“The new shipping center is twice as large as the existing logistics center,” the company said, “So, the center will contribute to enhancing delivery systems for consumers living in the Gyeonggi area.”