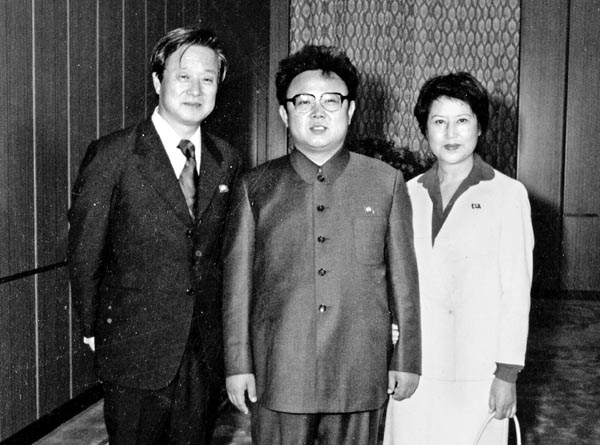 Shin Sang-ok, right, North Korean leader Kim Jong-il and Choi Eun-hee stand together in this photograph, featured in the movie “The Lovers and the Despot.” It was believed to have been taken around 1983. [HELLFLOWER FILM LTD.]

PARK CITY, Utah - A documentary revolving around the abduction of a South Korean actress, her director husband, and their dramatic escape from North Korea premiered last week, at an international movie festival in the United States.

“The Lovers and the Despot,” a documentary by British directors Robert Cannan and Ross Adam, premiered on Jan. 22, at the Sundance Film Festival in Park City, Utah.

The 94-minute film is based on the true story of Choi Eun-hee and Shin Sang-ok, a prominent celebrity couple who were kidnapped and taken to North Korea in the 1970s upon the orders of the late North Korean leader Kim Jong-il, a known cinephile, and their bold escape eight years later.

Choi, a movie star, was lured to Hong Kong by a North Korean agent and kidnapped in 1978. Shin, a director and Choi’s ex-husband, was abducted six months later when he traveled to Hong Kong in an attempt to find his missing ex-wife and thrown into a North Korean concentration camp. The two were reunited in North Korea in 1983 after Shin agreed to cooperate.

The documentary’s premiere at the festival proved to be a success, selling out on its opening and for all general screenings afterward.

“The Lovers and the Despot” reconstructs the pair’s eight years in detainment, from the time of their abductions in 1978 to their escape in 1986, via extensive interviews.

The documentary also features an unprecedented and rare audio recording in which Kim admits to the kidnappings. “I made the order so that you two could come to us,” he says. “We should stop creating solemn movies, resembling funerals, and make a movie to present at an international film festival.”

Choi says in the movie that Shin “told me that we needed proof because no one would trust our story if we ever escaped to the South. So I stuck a recorder in my purse and secretly recorded him.”

In the documentary, Choi says that she and Shin were forced to create 17 movies during their detainment in North Korea.

In 1986, the two managed to persuade the North Korean leader to send them to Vienna for an overseas shoot, where they escaped to the U.S. Embassy.

Afterward, Shin continued his career in film. He died in 2006. Choi went on to publish a memoir in 2007.

It took two years to convince Choi and her family to participate in the documentary, according to the directors, who promised to present the story as truthfully as possible.

The couple’s account of their kidnapping was met with disbelief by some skeptics, who speculated that Choi and Shin had voluntarily gone to North Korea. Cannan and Adam said they contacted North Korea and the U.S. Central Intelligence Agency for the documentary, though their inquiries were rejected.

“The Lovers and the Despot” is scheduled to be shown at other major festivals before being released for a wider audience.