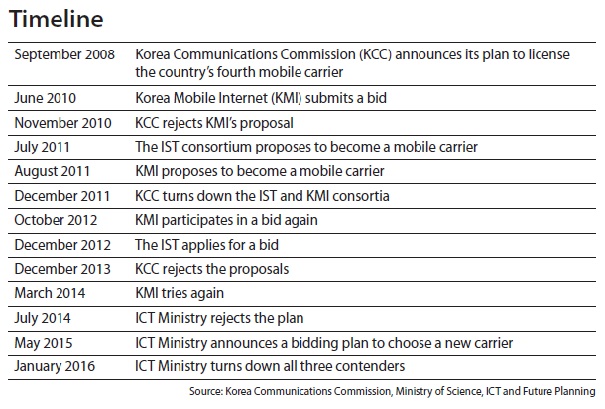 The Ministry of Science, ICT and Future Planning on Friday turned down bids by three companies to become the country’s fourth mobile carrier because they lacked “feasibility and reliability”.

The ministry said the participants failed to meet requirements set by the regulator, especially in their ability to finance their business.

“The screening committee concluded that the three units, overall, came up with plans that lack feasibility and reliability,” the ministry said in a statement. “They also failed to present specific proposals to develop networks and provide telecom services.”

The screening committee reviewed submissions between Sunday and Friday. It is the authorities’ seventh attempt to select the country’s fourth wireless carrier in an industry dominated by SK Telecom, KT and LG U+.

The Korea Communications Commission raised the need to license a new telecom player in 2008 to increase competitiveness and potentially lower cellphone bills.

But critics believe the telecom industry is already saturated and that no new player is needed.

The existing operators also said that smaller mobile virtual network operators that rent out parts of frequency bands from the three telecom companies will be negatively affected by the presence of a new carrier.

To pass the screening by the Ministry of Science, ICT and Future Planning, a potential carrier must receive over 70 points in the assessment process.

All three contenders failed to meet the mark. Quantum Mobile received the highest score of 65.95, Sejong Telecom received 61.99 and K Mobile was given 59.64.

Up until the sixth bidding effort, Korea Mobile Internet, a local consortium of small businesses, attempted to gain a license, though it repeatedly failed.

The consortium, led by a former high-level civil servant at the ministry, Gong Jong-ryeol, did not take part in the recent bid.

After revealing its decision, the ministry said that it will reconsider its criteria.

“After deliberating on the telecom industry’s market conditions, the ministry will re-establish criteria and assessment items,” the ministry said.