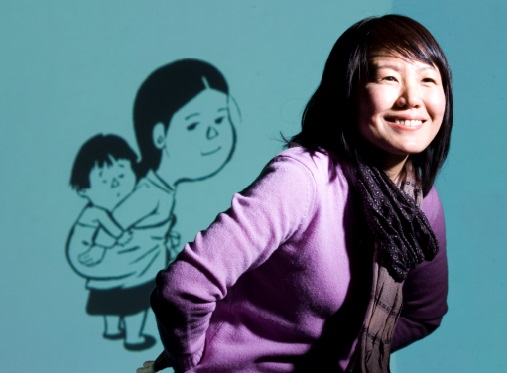 Cartoonist Keum-suk Gendry-Kim stands in front of her ongoing project, with the working title “The Third Voice.” The cartoon is based on the testimonies of Korea’s former “comfort women.” [KWON HYUK-JAE]

“I deliberated over the kidnapping scene, on whether I should depict it as a ‘comfort woman’ once told me, with two men locking her arms and dragging her away.

“Or was she perhaps tricked into riding a truck where the driver assured her he was taking her home?”

These were the types of questions that cartoonist Keum-suk Gendry-Kim considered in her newest project, a cartoon about the multitude of young Korean women forced into Japanese military brothels during World War II.

The 45-year-old uploaded a scene from her latest undertaking, tentatively titled “The Third Voice,” on her blog on Wednesday.

She had just returned from a trip to Vietnam the previous day after researching the civilian massacres that took place there during the war. For six days, she met with survivors and collected their stories, which she plans to use in the project.

“When people think of the word ‘cartoon,’ the first thing that pops into their heads are light webtoon stories,” she said. “But I want to draw cartoons and illustrations that evoke serious reflection.”

Gendry-Kim’s work is far from light. Most of her pictorials delve into social issues. Her major cartoons include “Secret,” which tells the stories of Korea’s comfort women; “Jiseul,” which depicts the Jeju Massacre of 1948; “Climbing My Mountain,” which shares the pain of families separated during the conflict on the Korean Peninsula; and “The Song of My Father,” which depicts modern Korean history as Gendry-Kim experienced it.

The issues brought to life in her cartoons leave viewers with something quite unexpected. More than violence and cruelty, it is a sort of refined sadness that resonates.

“Depicting violence for violence does not promise a good delivery of the incident,” she said. “It’s important for the illustrator to digest the incident and then produce it with a cartoonist’s creativity.”

The word “cartoonist” did not define Gendry-Kim’s dreams when she first went to study sculpture at L’Ecole Superieure des Arts Decoratifs de Strasbourg in France after graduating from Sejong University in 1994 with a degree in painting.

She began translating Korean cartoons there to make ends meet and translated more than 100 projects from 2004 to 2010, including Lee Hee-jae’s “Billboard Star” and Oh Sae-young’s “Picture Diary of a Rich Man.”

Upon returning to Korea, she jumped into illustration.

Gendry-Kim is currently working on cartoons revolving around the civilian massacres in the Vietnam War and Korea’s comfort women, as they are euphemistically known. She emphasized, however, that her works don’t deal with the tragedy of social issues themselves, but the tragedies that took place in an individual’s life.

“I’m not trying to excavate different social issues. I am merely telling how people lived and do live. These are things we need to think about together,” she said. “Telling the stories that are difficult to tell - that is one of the reasons why artists exist.”