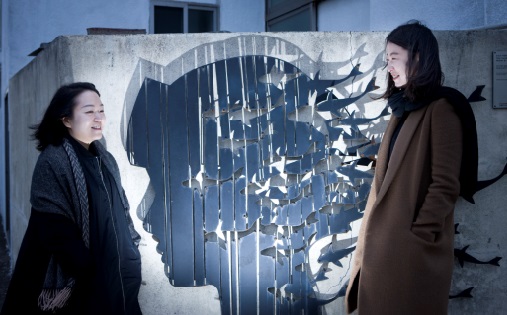 Common perceptions of graffiti include pictorial texts and provocative paintings.

But walking through Gimnyeong-ri in the scenic resort island of Jeju proves that metal can be a similarly appropriate medium for a picturesque mural.

This unique wall is the brainchild of metal artists Nam Hyun-gyung and Lee Hyun-jeong. Nam, 33, first moved to Jeju from Seoul in 2013 after living a busy yet unfulfilled life in the capital. She set up her work station near Gimnyeong Beach to take in the view during her work hours.

But instead of displaying her creations in a private exhibition space, she wanted to display them to village residents - mostly retired fishers or farmers who often walk along the beach in their free time.

“The villagers sometimes visit my workspace and tell me my work is beautiful,” Nam said, “So I thought it would be good to show off my artwork for them.”

She proposed her idea to the district office and later received funding to display her creations near Gimnyeong Beach.

In 2014, Lee, her former co-worker, also joined the project.

The two decided to open their workstation to the public on weekends by converting it into a cafe. The venue, Dasi Bang, has since become a popular tourist destination.

The artists installed a total of 28 works, their themes revolving around the symbols of the island - wind, marine animals and the local haenyeo, the country’s legendary female divers who scour the deep ocean waters for shellfish and seaweed.

One of the most eye-catching metal creations is likely that of a Wonder Woman-like diver carrying a net and wearing flippers instead of the comic book superhero’s signature red boots.

“People assume that the hanyeo lead exhausting lives,” Nam said. “But if we look closely, they love their work.

“I wanted to express the energetic and vigorous image that I got from them.”

But living as an artist in the village hasn’t always been easy.

“Some people say the metal works, which are typically brown and black, look gloomy,” she said.

But things have changed as more visitors come to the village to watch the pair fashion their art. And Gimnyeong-ri has since become renowned for having a mural made from metal.

“I heard that visitors have increased threefold since we’ve come here,” Nam said. “And residents really welcome the tourists and sometimes give tours because they like introducing where they live to others.”

Still, the two artists want to take their project a step further and are currently preparing to install more displays along the trail and sell their creations online.

The proceeds will go back to the village.

“I’ve learned the joy of sharing while I create, which was something I never felt in Seoul,” Nam said.