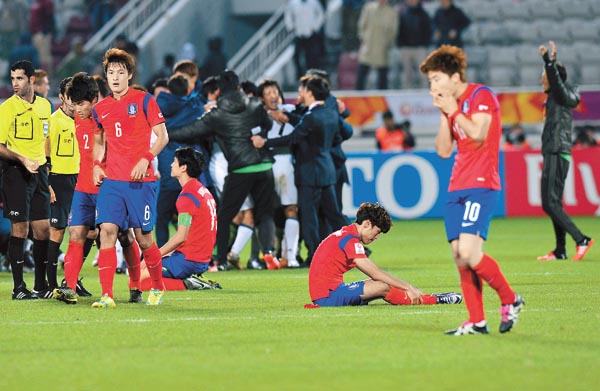 Korean players walk away in disappointment after 3-2 defeat to Japan in the Asian Football Confederation U-23 Championship final in Doha on Saturday. Though the team has already secured a berth at the 2016 Summer Games, the loss ended their undefeated streak in the final round of Asian Olympic qualifiers that started in 1992. [NEWSIS]

Korea finished the runner-up in the 2016 Asian Football Confederation (AFC) U-23 Championship after suffering a painful 3-2 loss against arch rivals Japan on Saturday in Doha.

At the Abdullah Bin Khalifa Stadium in the Qatari capital, Korea blew a 2-0 lead and picked up a loss in the final round of the Asian Olympic qualifying tournament for the first time in 24 years.

Before entering the final against Japan, Korea had 25 wins and nine draws in the final round of regional Olympic qualifiers. The undefeated streak started with a match against Japan in 1992, but coincidently, it was the same country that ended the young Taegeuk Warriors record.

This was also the first time that Korea has fallen to Japan in the Olympic qualifying stage. But the squad returned home on Sunday with an Olympic ticket in their hands.

The top three countries in each group qualify for the 2016 Summer Games. With two finalists securing their Olympic spots, Iraq won the match against host Qatar to grab the last ticket.

Although both teams entered the final with an assured ticket to Rio de Janeiro, the rivalry between two East Asia countries added excitement to the final.

As the team’s main striker Hwang Hee-chan went back to his Austrian club Salzburg, Korea put Incheon United forward Jin Seong-uk up front in its 4-2-3-1 formation. Although it was only his second start of the tournament, the 22-year-old played an impressive part in Korea’s early lead.

In the 20th minute, left back Sim Sang-min sent a cross to Jin and the 1.83-meter forward headed down for midfielder Kwon Chang-hoon who volleyed with his right foot to score the opening goal.

The Suwon Samsung Bluewings midfielder’s shot was deflected after hitting defender Takuya Iwanami and went past Japanese goalkeeper Masatoshi Kushibiki. It was Kwon’s fifth goal of the tournament.

Two minutes into the second half, Jin stepped up for his own finish. As midfielder Lee Chang-min delivered a cross to Jin in the penalty box, the forward turned and struck with his left foot to make it 2-0.

But Korea didn’t hold onto their two goal lead for long. In the 67th minute, Shinya Yajima fed a pass to second-half substitute Takuma Asano who flicked the ball over goalkeeper Kim Dong-jun to make the score 2-1.

And just a minute later, Yajima evened the score with an easy header that wasn’t challenged by Korean defenders as he converted a cross from Ryosuke Yamanaka.

As the tide swept to Japan, Korea brought on forward Kim Hyun and midfielder Kim Seung-jun in the 78th minute to boost their chances, but it was Japan who eventually went ahead with Asano becoming a hero for the young Samurai Blue.

In the 81st minute, midfielder Park Yong-woo made a clearing mistake which gave a counter attack chance to Japan. Shoya Nakajima secured the ball and flipped it over to Asano, but defender Yeon Jei-min failed to contain Asano who took advantage of the one-on-one opportunity against goalkeeper Kim and scored the winner.

Coach Shin Tae-yong said after the match that he felt sorry for the supporters at the stadium and in Korea who watched the defeat. But he promised that the team will not show the same performance in the Olympic stages in August.

“There is no excuse for the 3-2 loss,” Shin said after the match. “We have learned that if we lose our concentration just 1 percent during 90 minutes, this kind of result can happen.”

Shin, 45, hinted that the Under-23 team could use a veteran defender as a wild card in Rio. In the Summer Games, three players who are aged over 23 can be selected as a wild card for the team. Korean football fans have already speculated defender Hong Jeong-ho of FC Augsburg will be picked.

“We need someone who can lead our players in defense,” Shin said.

“I felt that even if we have good offense, we can collapse in a short time. I still prefer playing attacking football, but in a tournament like the Olympics, defense is the most important thing.”

Shin, who is also assistant coach of the senior men’s football team, added that even although the result was disappointing, Korea dominated Japan in the match.

The Under-23 team has been using various formations in this tournament and the coach claimed there is still room for the team to develop.

“We played rough football before but now we are having passing games,” Shin said. “In order to get out of Asia and challenge world class teams, now I know the style of player we need.”

Korean players were disappointed with the result, but said the defeat will serve as an example for them to progress for the Olympics in Rio.

“I’ve never experienced this kind of match,” Kwon said. “It doesn’t make sense that we allowed two goals in just two minutes. What can we say?”

Midfielder Moon Chang-jin, who scored four goals in the tournament, said that players might have relaxed after their second goal.

“It’s sad that we didn’t get extra goals,” he said. “I think the defeat will help boost us in the future. I want to meet Japan again in Rio and take revenge.”