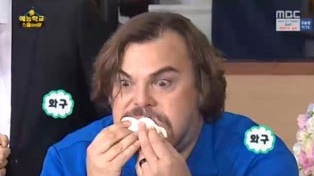 Hollywood actor Jack Black’s appearance on the popular reality TV show “Infinite Challenge” on Saturday was met with rave reviews from the local media and viewers.

The 47-year-old actor made an appearance on the show to promote his animated feature film “Kung Fu Panda 3,” in which he lends his voice to the lead character.

The local online news agency OhMyNews reported on Sunday, “Jack Black appeared on the show to promote his film, but he did his best for every game and he also did more than the show asked of him.”

Another online news agency, Joy News 24, wrote, “We didn’t see a Hollywood star on ‘Infinite Challenge,’ but a man who was full of energy.”

Many viewers also left comments about the episode online, saying they would like to see Black as the sixth member of the popular TV show’s lineup.

Black was challenged to play several of “Infinite Challenge” classic games, such as blowing out a candle while wearing a stocking over one’s head and the marshmallow game, during which the actor stuffed his mouth with 14 marshmallows. He won the two games.

The “Infinite Challenge” episode featuring Black achieved the highest viewership rating of 15.6 percent of all the TV shows that aired during the same time slot on Saturday.

Black mentioned his experience on the reality show during a recent appearance on “The Ellen DeGeneres Show” back in the U.S. He described “Infinite Challenge” as “legendary, crazy TV show.”

He continued, “We got crazy. In Korea, they know to do party. … It’s the No. 1 rated show in Korea and you might want to check them out.”

Black said on “Infinite Challenge” that Korea is the “third-largest film market” for American films.