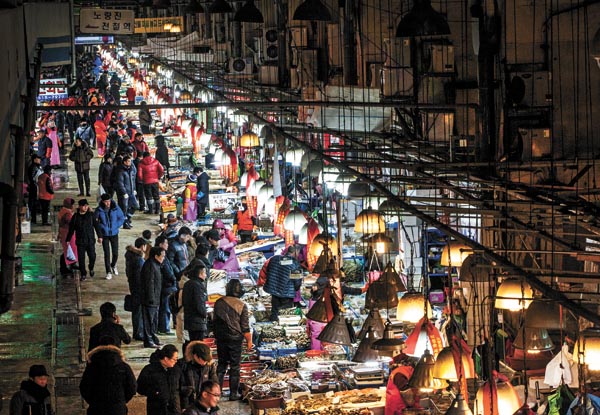 Visitors peruse fresh seafood at the Noryangjin Fish Market in Yeongdeungpo District, western Seoul. The lamps above the sellers are adorned with red ribbons protesting Suhyup’s attempt to move the market to a new building. [Park Sang-moon]

Chef Shaun Hergatt of the New York Michelin-starred restaurant Juni made sure to stop by the Noryangjin Fish Market during his visit to Seoul last year to get some fresh local marine ingredients.

While chefs come to check out the seafood, fans of Korean dramas come to retrace where their favorite actors filmed certain scenes. After the fish market in Yeongdeungpo District, western Seoul, was featured in “My Love from the Star” (2013-14) on SBS, more Chinese tourists are including the market as one of their must-see stops while visiting Seoul.

However, this popular destination is currently in limbo. The market, which has been occupying the same spot near Noryangjin Station, on subway line No. 1 and 9, since the 1970s, is supposed to move into a newly built, modern building right next door, but the merchants are refusing to make the switch.

After the existing building was deemed in 2005 as too outdated to continue housing the 680 individual businesses there, Suhyup, the company that manages the market, decided to come up with a plan to update the market.

Since renovating the existing market would require merchants to relocate or temporarily close their businesses during construction, Suhyup decided to use the land right next to the market in an attempt to minimize the inconvenience placed on businesses.

After the construction that began in 2010 was completed last year, the building is now ready to welcome the merchants. But even though the official move-in date was scheduled for two weeks ago, no one has yet moved into the new building. 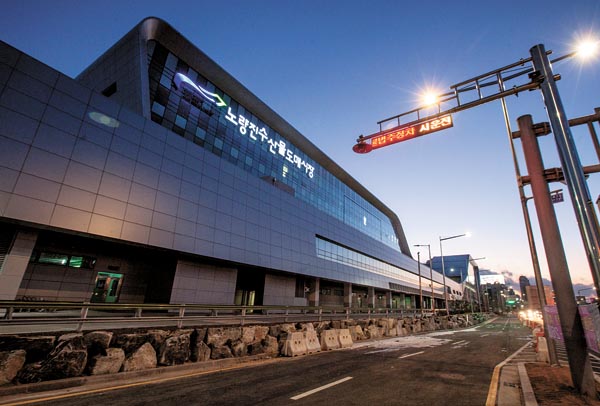 The newly built facility for the Noryangjin Fish market right next to the old building stands empty. The merchants argue that the space allotted to each seller is too small to allow them to continue doing business at the current volume. [Park Sang-moon]

Merchants argue that they can’t move in because the space allotted to each business in the new building is too small for them to fit their water tanks, refrigerators and other necessary equipment while also serving consumers.

“Moving into the new building means we lose the real character of a wholesale market, which has attracted tens of thousands visitors,” said Lee Seung-ki, a store owner at the market and president of the emergency planning committee representing the voices of merchants there. “The space is very small, so if we move in now, it will only mean we’ll become more like a small fish market anyone can easily find in a neighborhood supermarket.”

Another merchant in her 50s, who has been working at the market for more than 20 years, argues that since the fees Suhyup charges businesses to host commercial activities in the new space are increasing, she deserves to have a bigger space to cater to customers more conveniently. The seller, who currently occupies a corner storefront, says the 5-square-meter (54-square-foot) space at the new building is too tight.

“I don’t mind paying a bit more as long as there’s a guarantee I get to serve customers in a better setting,” said the merchant, who declined to give a name. “What we expected and were promised was a modernized and convenient commercial experience, not a smaller space.”

These store operators have been participating in a protest every Tuesday and Thursday for about an hour to demand that Suhyup hear their proposals. Lee has communicated that they want Suhyup to remodel the existing market rather than move the merchants.

However, Suhyup claims that it has already talked with merchants and heard their requests. 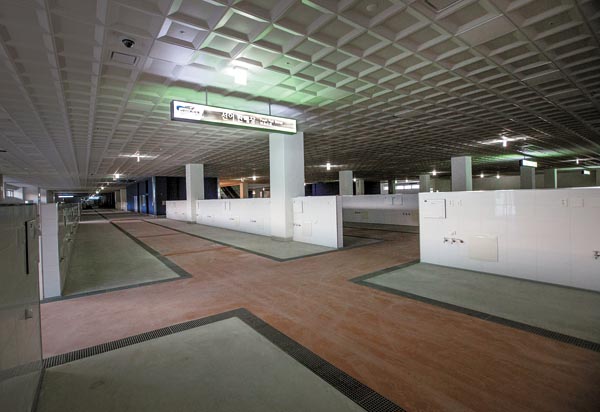 The newly built facility for the Noryangjin Fish market right next to the old building stands empty. The merchants argue that the space allotted to each seller is too small to allow them to continue doing business at the current volume. [Park Sang-moon]

“We have suggested ways to build the new building, and since the market is being used by local merchants, we tried our best to accommodate their requests while coming up with a construction plan,” said Gong Yun-sik, an assistant director in Suhyup’s communication team.

Now, the company has to manage two properties and can’t go forward with its plan to tear down the old market. The company says it will see a loss of about 1.7 billion won ($1.4 million) for each month the relocation is delayed.

Suhyup explained that the merchants in earlier discussions wanted both retail shops and a place for auctions on the first floor of the new building, and they understood it was inevitable that the spaces allotted for each seller would be smaller. On the other hand, Suhyup said it initially proposed the auction venue be on the first floor and the shops be on the second floor to provide merchants more space. The company also pointed out that the new building has more efficient connections to electricity and water sources, so merchants wouldn’t need as much space as they currently have.

“Merchants have been changing their reasons for not moving in, and they also have been pushing back meetings to discuss possible solutions, while we are willing to sit down,” Gong said, adding that some had initially complained the monthly rent was too high and are now arguing the smaller space is the problem.

“We have delayed the move-in date to March 15, and if the situation persists, we also have to review how we will respond to the situation.”

The question also remains of how Suhyup is going to use the land currently occupied by the old fish market. While there have been numerous proposals, Suhyup says it hasn’t decided what to do with the historic place, but it says it will help promote the fish market and have a marine theme.