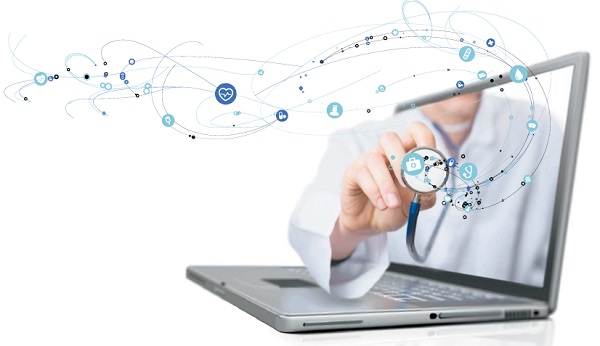 At the 2012 Yeosu Expo, carrier SK Telecom devoted a booth to showcasing its vision for the imminent future of health care: remote treatment.

Visitors could test their blood pressure, and after inputting the information into a smartphone app along with answers to a few questions, the app offered a possible diagnosis and medical advice. When the service officially launches soon, the company claimed, doctors will be on call to provide additional consultation.

Four years later, the future SK Telecom thought was just around the corner has yet to come true.

This is because of regulatory barriers at home, while health care systems around the globe continue to evolve at a rapid pace.

“Zero progress has been made on the smart health platform since we showcased it at the Yeosu Expo,” said a manager at SK Telecom who requested anonymity. “There is nothing we, as an IT company, can do about it because the law prohibiting remote diagnosis and treatment of patients remains unchanged. What’s 100 percent certain, though, is that the health care field is a land of infinite opportunity for the IT industry.” 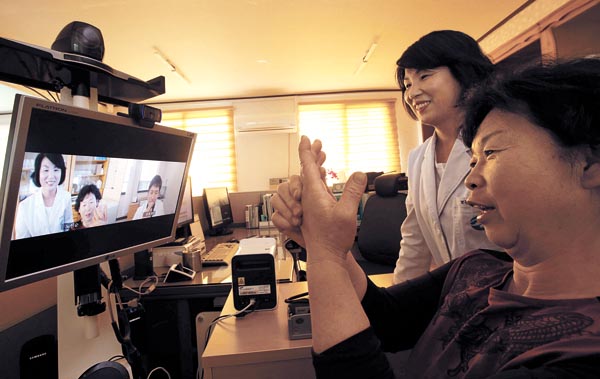 A patient at a public heath center in a remote county in Gangwon receives advice via monitor from a doctor at a large hospital elsewhere in Korea as part of a government-led pilot remote healthcare program. [JOONGANG ILBO]

Under Article 34 of the Medical Act, doctors, dentists and Oriental medicine doctors are allowed to discuss with their patients and share treatment options with other doctors via phone or video, but they must diagnose and treat patients in person.

The idea of so-called digital or smart health care, in which gadgets like computers, smartphones and wearables are used for medical purposes, was first hatched in Korea, which was once nicknamed the “world’s most wired country.”

The Ministry of Health and Welfare’s attempts to revise legislation to allow smart health care began in 2002, when the medical industry first saw the revolutionary - and lucrative - possibilities in applying information and communications technology to everything from treatment and prescriptions to surgery and aftercare.

But the efforts were immediately protested by the Korean Medical Association, an interest group representing doctors nationwide. Medical practitioners in Korea are notoriously protective of their turf and have worked to prevent non-doctors from gaining the ability to make even the simplest medical diagnoses. Every time the Health Ministry proposed revisions to the Medical Act over the last 14 years, doctors nationwide have gone on strike or threatened to do so, which has killed the efforts.

Within the association, different doctors cite different reasons for their opposition to smart health care depending on their own practice. The most frequently cited reason, though, is that senior citizens are at risk of mishandling medical equipment, which could lead to potentially severe accidents. 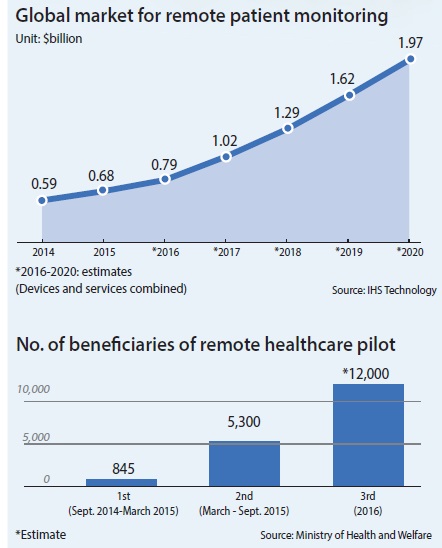 “Health care via smartphones and connected devices wreaks havoc on the security of patients’ personal information - an extremely sensitive matter among Koreans,” the association said in a statement.

Others claim that smart health care raises the chances of misdiagnosis, and in such a case, it wouldn’t be clear who was to blame for the consequences.

“A doctor needs to meet the patient in person, and palpation is at times a crucial part of the diagnosis. How are they [the ministry] going to take responsibility if anything goes wrong with the digital diagnosis?” said a private family physician who runs his own clinic in Seoul. “The ministry will end up passing the buck to doctors, which is why we are against the scheme.” 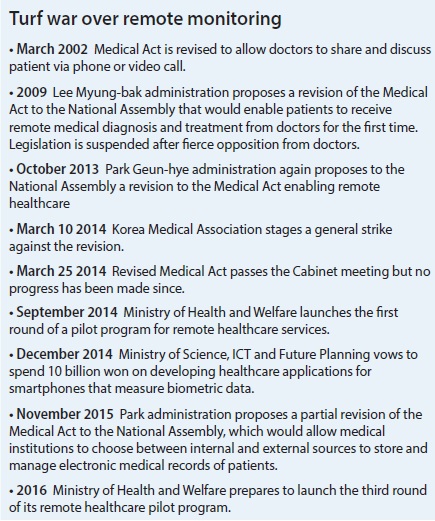 Doctors who run small private clinics also say they will lose patients to bigger providers, including general hospitals, as they would have more resources to purchase medical devices necessary for smart health care services, as well as hire the staff to operate them.

Some opposition lawmakers have supported the protesting doctors, claiming the government is colluding with conglomerates to benefit large general hospitals like Samsung Medical Center.

As a result of this tug-of-war between doctors and the government, Korea’s digital health care system remains in its infancy, while other countries around the world are combining IT and medical services with marked success.

In Japan, patients suffering from chronic diseases have been able to have their symptoms checked out remotely since 1997, and the European Union began distributing smartphones and wearables in 2013 to senior citizens to provide health care and improve emergency medical care.

In the United States, the legitimacy of smart health care is no longer being debated. Rather, it “presents one strategy to help achieve the triple aim of better health care, improved health outcomes and lower costs,” according to a recent report from the National Conference of State Legislatures. “Telehealth is a rapidly growing field that has the potential to help states leverage a shrinking and maldistributed provider workforce, increase access to services, improve population health and lower costs.”

China, which has the largest health care market in the world with its population of 1.3 billion, earmarked $9.5 billion in government funds last year to develop electronic medical records to facilitate digital health care. Investors poured almost $700 million into the digital health care industry in China in 2014 to support online physician-patient communication devices and disease management apps, according to Boston Consulting Group, and that amount is set to continue growing.

But the application of IT to traditional businesses isn’t confined to the medical sector, as the widespread adoption of smartphones has accelerated the trend in every industry.

“Physician shortage and the adoption of smartphones and tablets are driving the trend towards the ‘new health economy,’” said a report from PricewaterhouseCoopers last November.

The number of patients being remotely monitored by their physicians around the world is set to grow from 664,000 in 2014 to as many as four million in 2020, and the devices and services market for smart health care is predicted to more than triple from $597 million to nearly $2 billion over the same period, according to market researcher IHS Technology.

“Doctors in Korea admit they are providers of excellent medical services,” a high-ranking official at the health care policy bureau under the Ministry of Health and Welfare said with a sigh. “But they are reluctant to add value to their services by marrying them with yet another excellent field, IT.”

That reluctance may come back to haunt them, according Koo Tae-eon, a lawyer and CEO at Tech and Law, a Seoul-based law firm specializing in ICT. He warned that doctors in Korea will soon face a deluge of remote medical service providers from overseas.

“They need to realize that the present global trend is that each and every offline service is being linked to online and being digitized,” Koo explained. “They should look at other industries absorbing the trend unless they want to be deprived of their leadership in the medical industry.”

What if an IT giant such as Apple in the United States connects an upscale U.S. hospital with patients in Korea? Koreans will likely find the services highly appealing, forcing local hospitals to wage a losing battle against big names overseas. Even if the Korean government explicitly bans foreign medical service providers operating from abroad, the move would be nearly impossible to enforce, Koo says.

But smart health care isn’t the only sector being stunted by regulations, as homegrown companies with other kinds of cutting-edge medical technology can attest.

But its co-founder and CEO Anthony Paek says that because of regulations in Korea, his promising business cannot expect to make the kind of leaps in its capabilities that IBM was able to achieve through a $1 billion acquisition deal sealed last August.

The 105-year-old tech giant acquired Merge Healthcare, a seller of systems that help doctors store and access medical images, to supplement its Watson high-performance computing and analytics platform. The move was part of IBM’s plan to grow in the next century by using technology to better identify ailments such as cancer and heart disease.

Merge owns some 30 billion medical images including X-rays, computerized tomography and magnetic-resonance-imaging scans collected from a number of hospitals around the United States, which IBM says are an invaluable resource. The more data, the better chance there is for doctors to diagnose diseases with precision and treat patients more efficiently.

“IBM has gained an enormous amount of data through the acquisition deal,” Paek said, “which is impossible for us at the moment.”

That disparity stems from a regulatory difference between Korea and the United States. Saving patients’ information in a digital medical record outside of a hospital into something like the cloud, as well as sharing that digital record between institutions through such a system, is illegal in Korea.

Although the Health Ministry proposed last November revising the article in the Medical Act to allow hospitals to “externally” preserve medical records, the revision is vague and fails to specify the usage of cloud services. Surprisingly, both the ministry and doctors agree on the privacy and security risks involved in moving to the cloud, but stymieing adoption of cloud services goes against the Park Geun-hye administration’s drive to propel the promising industry.

“If sharing of patients’ medical records and various clinical indicators over doctors’ mobile devices is made possible, it will make diagnosis easier and improve precision,” said the CEO of a local IT start-up, adding that the internal servers even at respected hospitals are more vulnerable to being hacked.

As fears mounted that the Korean medical industry is lagging further and further behind, the Health Ministry scrambled to launch a six-month pilot remote health care program in September 2014. The second round wrapped up last year.

The program allows a small number of small-sized clinics run by select doctors to remotely monitor and provide care to seniors who have been diagnosed with high blood pressure and diabetes, soldiers based in isolated areas and deep-sea fishermen who have no access to medical care while on the job. Should any complications be spotted, the doctors are supposed to transfer the patients to bigger hospitals.

“We wish people could realize that remote health care programs can greatly help even those who are geographically isolated to manage chronic diseases,” said Kwon Duk-chul, head of the health care policy bureau at the ministry in a press briefing on Jan. 18. “[The ministry] and doctors have maintained different views [on smart health care] until last year, but we intend to proceed with the next pilot program by taking into account its benefits to the health care of certain groups, as well as measures to help hospitals get on board with their support.”

He also unveiled the ministry’s plan to discuss with doctors a third round of the pilot program, which would be scheduled to start within the first half of the year. The ministry aims to almost double the number of participating clinics from 148 in the second round to 278 in the third, and will add wearable devices to the medical equipment available for the service.

The expansion underscores the ministry’s desire to finally push through smart health care.

“When people realize and accept the necessity of the program,” said another health care policy bureau official at the ministry, “it will get easier for the government to persuade doctors who are opposed to revising the legislature. We are pretty upbeat about the possibility of easing the conflict this year.”

“The Health Ministry seems to consider medical services only as an industrial sector,” Kim Joo-hyun, a spokesman with the association, said after the ministry’s announcement. “It initially vowed to operate the pilot program only in alienated areas, but it keeps expanding.”

The ministry released a survey following the second round of the pilot program on Jan. 27, in which over 80 percent of the service beneficiaries responded that they were satisfied with the treatment they had received. But the association claimed it won’t participate in the third round of the pilot program, arguing that a high satisfaction level doesn’t necessarily mean the service is effective.