Courts have history of lenience for kid killers

Courts have history of lenience for kid killers 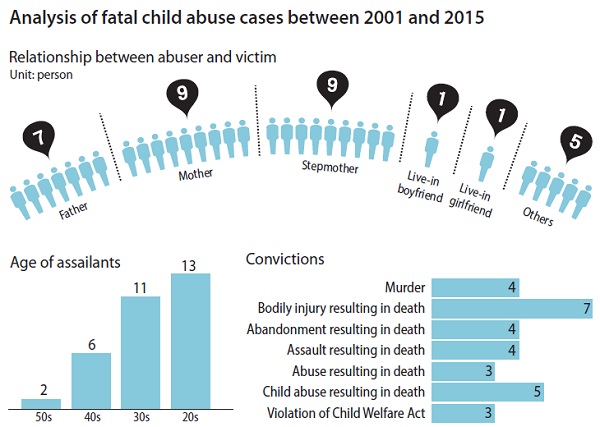 In the wake of a series of fatal child abuse cases, Korea has become alarmed at the lenient punishment given to child killers.

According to a JoongAng Ilbo analysis of 30 verdicts in cases of children being killed between 2001 and 2015, the average jail sentence was 6.66 years.

Only four abusers were convicted of murder, and one of those convictions is being appealed. Most of the cases studied, 23 in all, ended in some kind of manslaughter conviction such as bodily injury resulting in death or abandonment resulting in death.

Most of the attackers were the biological parents of the children who died, including nine mothers and seven fathers. Another nine assailants were stepmothers.

The average age of victims was 5.7 years.

“The steady stream of child abuse cases have made people feel that even biological parents should be harshly punished,” said Kim Young-cheol, a professor at Konkuk Law School. “The courts, however, still have a strong tendency to be lenient when having to adjudicate murder charges in child abuse cases.”

The JoongAng Ilbo analysis pointed out that prosecutors’ attempts to get murder convictions for abusive parents keep failing because courts believe parents who defend themselves by saying, “How can a parent slap their children with the intention to kill?”

Choi Wan-jin, a law professor at Hankuk University of Foreign Studies, urges harsher punishment for fatal assailants regardless of whether they were the biological parents of young victims.

The issue resurfaced after the mutilated remains of a 7-year-old boy were found frozen in a house in Bucheon, Gyeonggi, nearly four years after the boy vanished from school. After first denying any abuse, the parents admitted the father did abuse the boy, according to local police.

It was not until 2014 that the criminal justice system convicted a parent or step-parent of trying to kill a child intentionally with their bare hands. The case was of a child-abusing stepmother surnamed Park who beat an 8-year-old girl so hard that 16 of her 24 ribs were broken. Some ribs pierced her lungs, and she died in 2013.

The Ulsan District Court convicted the 41-year-old stepmother of causing bodily injury resulting in death and sentenced her to 15 years behind bars. In legal terms, the panel of judges did not admit willful negligence or dolus eventualis, which means the defendant was intending the consequences of his or her actions.

But in October 2014, the Busan High Court increased the jail term to 18 years, saying Park had the intention of murdering her stepdaughter. Prosecutors had sought a death sentence. Park abandoned any further appeal.

Jail terms in such cases will differ widely depending on whether the death was an accident or intentional.

The guideline by the Supreme Court’s Sentencing Commission for conviction on a child’s murder is a jail sentence of 10 to 16 years. If there is an aggravating factor, the prison term may go up to life imprisonment.

However, the guideline for manslaughter caused by child abuse is four to seven years, with a maximum sentence of nine years when there is an aggravating factor. And if there are mitigating circumstances, the guideline goes down to a minimum of two years and six months.

In April 2014, a 22-year-old online gaming addict surnamed Chung was arrested after police found the badly decomposed body of his 26-month-old son in a garbage bag on the street. Chung confessed that he punched the son’s solar plexus three times and covered the baby’s mouth and nose.

Last June, a mother put two pairs of pantyhose in her 2-year-old son’s mouth and wrapped the boy’s upper body with a blanket for 30 minutes. The boy choked to death.

Prosecutors sought a charge conviction and 15-year jail term, but the Seoul Western District Court didn’t acknowledge willful negligence and convicted the woman of child abuse resulting in death because she didn’t block his breathing through his nose and was mentally ill.