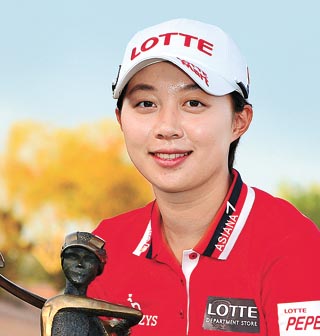 Kim rebounded from a bogey on the 16th hole with a 9-foot birdie putt on the par-3 17th and closed with a par for a two-stroke victory over Lewis, 2015 champion Kim Sei-young and Anna Nordqvist.

Hyo-joo shot a 7-under 66 at the breezy Ocean Club to finish at 18-under 274. The 20-year-old player has three LPGA Tour victories, also winning the 2014 Evian Championship and 2015 Founders Cup. She has nine victories on the Korean LPGA.

“She’s just so used to winning,’’ caddie Dean Herden said. “I mean, she’s won so many times in Korea that she’s very comfortable when she’s on top of the leaderboard, and getting there. Her iron play got better today. Didn’t hit the iron shots very well yesterday, hit a lot of thin shots. Last night we were working on something and today she was able to hit a lot more solid shots.’’

Needing an eagle to force a playoff, Lewis parred the par-5 18th for a 68. She has nine runner-up finishes in a 40-event victory drought that dates to June 2014. The 11-time tour winner has 22 career second-place finishes.

“Seven under’s a great score and I knew it was going to take something like that today on this golf course with less wind,’’ Lewis said. “You know you needed to shoot a number. Just got off to a bit of a slow start. Making bogey on 8 really hurt, but proud of the way I came back on the back nine and gave myself a chance.’’

After the bogey on the difficult par-4 16th that cut her advantage to one shot, she hit a slight draw with a 4-iron to set up the birdie putt on the 171-yard 17th.

“Very tricky one,’’ Herden said. “Grain was into us. It could have gone left to right or right to left, we weren’t quite sure. She decided inside left edge and straight in.’’

Kim Hyo-joo had four birdies on the front nine, making three in a row on Nos. 4-6 and adding another on No. 8.

The third-ranked Lewis parred the final three holes after birdieing Nos. 13-15. After missing long birdie tries on 16 and 17, she hit a 3-wood into the light rough near the right-side front bunkers on 18, flopped 8 feet past and two-putted for par.

“I was just trying to get the 3-wood to skip up the hill and just started it a little too far right,’’ Lewis said.

Kim Sei-young had a double bogey on the par-4 ninth, then rallied with four back-nine birdies.

“I did my best, but I couldn’t catch Hyo Joo,’’ Sei Young Kim said.

Megan Khang, playing her first event as an LPGA Tour member, bogeyed the final hole for a 60 to drop into a tie for 11th at 13 under. AP