No good news for Korea's exports in new year

No good news for Korea's exports in new year

A month has gone by since the New Year dawned, but the constant news of negative economic indicators ever since has people wondering when there’ll be a turnaround.

The latest disappointment came from exports, which have been one of Korea’s main growth drivers but have been suffering over the past year as instability in the global market continues to affect emerging markets.

Not only have exports been on their longest-ever decline, currently at 13 months, but they have also seen the sharpest year-on-year drop since 2009.

The continued decline in exports was accompanied by news that the current account balance for 2015 once again broke a new record by surpassing $100 billion. But what could have been positive news isn’t so welcoming on closer look. The data showed that the record-breaking surplus last month was largely due to a sharper drop in imports rather than any improvement in exports, which indicates that the struggling economy is forcing Korean production lines to cut back.

The report seems to have spooked even Finance Minister Yoo Il-ho, who told reporters on Monday that situation is worse than expected.

“By the end of the month I thought things would recover, but it got worse,” Yoo said.

According to the Ministry of Trade, Industry and Energy on Monday, outbound shipments in the first month of this year plummeted 18.5 percent compared to the same month a year ago, to $36.7 billion.

That’s the biggest drop since August 2009, when they nosedived 20.9 percent.

Furthermore, the 13-month decline in exports has tied the previous record, which took place between March 2001 and March 2002. 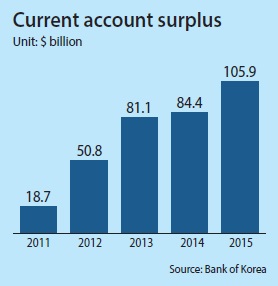 “Unexpectedly sharp shrinkage of oil prices in January and oversupply from Chinese rival products pulled down the per-unit prices of Korean-made goods,” said Lee In-ho, deputy minister for international trade and investment at the Trade Ministry, at a press conference Monday. “The stagnant economic situations in emerging markets, ranging from China and South and Central Americas to the Middle East, also brought down demands for Korean goods.”

Despite falling exports being a long-standing trend since the beginning of 2015, the Trade Ministry had kept an optimistic view until December, saying exports will soon recover, as the sheer volume of overseas shipments didn’t reduce. Instead, exports in dollar value declined due to the weak won.

In January, however, the sheer volume of shipments shrank 5.3 percent compared to a year earlier, due to a shortage of demand for most of Korea’s flagship products. The decline in the per-unit prices of Korean goods also quickened to 14 percent year-on-year.

Most flagship export products, ranging from petrochemicals and automobiles to semiconductors, steel, mobile phones and displays, saw their shipments fall.

As Dubai crude prices almost halved, from $45.8 per barrel last January to $26.9 last month, the dollar value of petrochemicals’ overseas shipments plunged by 18.8 percent compared to a year earlier and that of other oil products fell 35.6 percent.

Exports of Korean automobiles shrank 21.5 percent compared to a year earlier, while that of auto parts also declined 13.6 percent, mainly due to slowed demand from emerging economies. Shipments of display panels fell 30.8 percent compared to a year earlier, followed by shipments of steel, which dropped 19.9 percent, and semiconductors, which dropped 13.7 percent, due to oversupply from China. Overseas sales of Korean ships declined 32.3 percent year-on-year due to lack of demand for high-end ships like offshore plants.

Sales of smartphones and their parts shrank 7.3 percent year-on-year, largely due to toughened competition with mid- to low-end smartphones from Chinese rivals like Huawei. 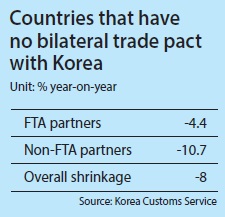 Korea saw shipments to its free trade partners shrink shrunk by 4.4 percent in January compared to a year earlier, while those to non-free trade partners plunged by 10.7 percent, according to the Korea Customs Service. The customs authority named free trade agreements as the main reason shipments didn’t fall further.

“Korean exports are expected to suffer at least until the first half, until the global economic situation revives and the oil price rebounds,” said Joo Won, a senior researcher at the Hyundai Research Institute, by phone. “The rebound of oil prices will lift up goods’ per-unit prices and bring back global demand.”

As exports continued to fall, the current account surplus by the end of last year turned out to reach an all-time record of $105.9 billion, which is a 25.6 percent increase from 2014.

In December alone, the country recorded a $7.46 billion surplus for the 46th consecutive month.

But this continuing surplus streak was the result of shrinking demand in the domestic market.

The goods balance recorded a $120.3 billion surplus last year because of an 18.2 percent fall in the imports of goods, the data showed. The total value of goods imported shrank because of low demand for foreign goods and low oil prices. The exports of goods fell 10.5 percent on-year.

Meanwhile, the service balance deficit widened to $15.8 billion last year, up nearly 77 percent from $3.68 billion in 2014. The larger deficit in services is attributable the decreasing number of foreign tourists visiting Seoul in the wake of the Middle East respiratory syndrome oubreak in May, while the number of Koreans who traveled abroad spiked.

The accumulation of surpluses, indicating ample liquidity, can have a positive impact on the capital market, given that the financial market could be volatile due to possible outflows of foreign capital when the U.S. Federal Reserve makes an additional interest rate hike in the near future.

But experts raise concerns about the mounting surpluses due to sharper decreases in imports than in exports, calling them a “recession surplus.”

“It is a typical ‘recession surplus’ triggered by sluggish private consumption and business investment,” said Kwon Tae-shin, chairman of Korea Economic Research Institute. “It also means a downscale in the equilibrium of the economy.”

The central bank, on the other hand, dismissed such concerns.

“It is not appropriate to explain the current trend as a ‘recession surplus,’” said Jeon Seung-cheol, director general of economic statistics at the BOK. “Imports and exports are simultaneously declining along with falling oil prices and exports of major products amid the sluggish global demand. It is not even certain to say the economy is in a recession.”

“As low oil prices and economic downturns remain this year, there are factors that will keep such surpluses this year,” said Lee Chang-seon, a research fellow at LG Economic Research Institute.

While the government and BOK project the current account surplus would reach $98 billion in 2016, private economic research institutes have made forecasts of around $110 billion.

“Recent sluggish export performances made us worry whether the export will be able to work as the main pillar of Korea’s economic growth or not,” said Justin Lee, senior executive managing director at the KITA, at a press conference. “But I thought our job is to get more domestic makers to sell abroad by offering basic export infrastructures and reducing cost burdens, in order to help Korea to accomplish $1 trillion trade this year.”

KITA will strengthen their 12 regional offices to offer help to some 1,500 small and midsize manufacturers in rural areas this year. The assistance includes free consulting in customs regulations and intellectual properties, and building free English websites and product catalogues. Similar assistances will be offered to existing exporters with their annual export plunged by 20 percent or more last year, compared to a year earlier.

“The nation’s January exports plunged largely due to cheap crude price and China’s slowdown,” Yoo said at a press conference on Monday held in Sejong City. “The Korean economy suffers from weakened industrial competitiveness, but private sector companies are unable to make proactive investments nor hire new workers due to the uncertainty that the legislature has created by not passing two economic revitalization bills, which is geared towards helping conglomerates restructure and enter new businesses.

“The success or failure of restructure initiatives now depends on the legislature,” Yoo continued, urging the lawmakers to pass the four labor-reform bills and two bills aimed at revitalizing the economy.