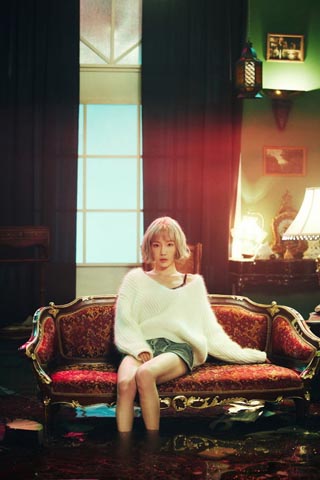 Taeyeon, a member of the K-pop group Girls’ Generation, will release two digital singles on Wednesday, according to her agency, SM Entertainment.

SM said Taeyeon is the first artist to release singles through Station, a new project in which the agency releases new songs from its musicians every week.

Lee Soo-man, the CEO of SM, had previously mentioned some new projects from SM for this year, one of which is Station.

“We will keep releasing music continuously and freely throughout the year,” Lee told the audience last week during a presentation called “SM Town: New Culture Technology.”

Taeyeon’s two digital singles are titled “Rain” and “Secret.” Through the two songs, the 27-year-old singer reportedly wanted to express her gratitude to her fans.

Taeyeon released her first solo album last October. Upon the release of the title track, “I,” the song topped iTunes charts in 12 different markets, including Hong Kong, Indonesia, Singapore, Vietnam and Thailand.

Taeyeon is the lead member of Girls’ Generation, and she also performs with Taetiseo, a spin-off group that also consists of Seohyun and Tiffany.