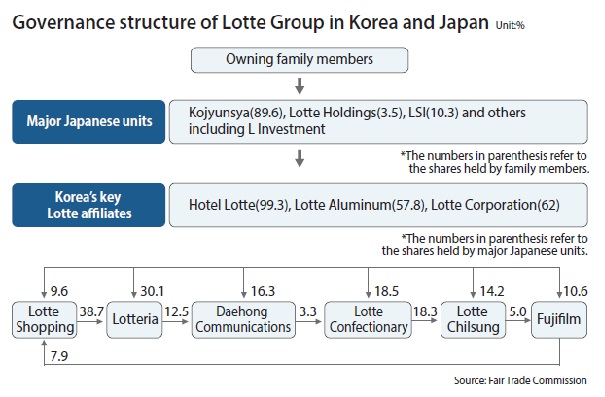 The founding family of Korea’s retail giant Lotte Group appears to have mislabeled public documents, making it seem as though the family had less control over the conglomerate than it actually did.

According to the Fair Trade Commission (FTC) on Monday, as of October last year, the Shin family - including current Chairman Shin Dong-bin and his older brother Shin Dong-joo - on paper controlled the country’s fifth-largest conglomerate with only a combined stake of 2.4 percent in its Korean affiliates, including the de facto holding company Hotel Lotte.

This was possible because of affiliates the Shin family owned in Japan.

According to the FTC, the family controlled Lotte’s Korean affiliates using their stake in obscure Japanese affiliates, including Kojyunsya, of which the family holds an 89.6 percent stake, and 12 subunits of L Investment. The investments made by these and other Japanese affiliates were mislabeled as “other affiliates” in the conglomerate’s financial disclosures submitted to the FTC, which would be the same designation given to third-party investors with no connection to the founding family.

These Japanese affiliates disguised as “other shareholders” had a sizeable control of major affiliates in the Korean Lotte Group, which then controlled smaller affiliates in a complicated web of cross-shareholding.

The FTC said it has found that the Shin family has full control of 37 overseas affiliates, with 36 located in Japan and one, LOVEST A.G., located in Switzerland. The family has direct investments in seven affiliates, including Kojyunsya and Lotte Holdings, which is considered the de facto holding company of Lotte Japan. The rest are controlled largely through Lotte Holdings.

While the family has been known to have a strong grip on influential overseas affiliates, until now, the extent of that control was unknown because all were non-listed affiliates.

According to the FTC, the Shin family holds a 93.2 percent stake in these overseas affiliates.

The findings by the FTC come as Shin Dong-bin, the youngest son of the founder, has been trying to repair Lotte Group’s public image, which was damaged last year by a highly public feud with his older brother Shin Dong-joo over who would succeed their father.

The current chairman, Shin Dong-bin, who succeeded in taking full control of the retail giant after the situation peaked in last summer, has promised to improve the transparency of Lotte Group by taking its de facto holding company Hotel Lotte public.

The FTC said that its investigation is still underway, and the critical issue is whether or not Lotte tampered with the records on purpose.

“The degree of penalty depends on whether Lotte did it deliberately,” said Gwak Se-bung, director at the FTC.

Lotte Group said on Monday that it hadn’t intended to deceive the regulator.

“The poor handling regarding reporting stems from Lotte’s unique business structure spanning both Korea and Japan, but there was no intention behind it,” the group said in a statement.

The group stressed that it is on track to reduce its cross-shareholdings and list Hotel Lotte.

Lotte Group also stressed that it is paying all its taxes not as a Korean company. The fact that both sons of the founder are more fluent in Japanese raised criticism as to whether it is even a Korean company.

Despite the conglomerate’s ongoing restructuring efforts, there appears to be a long way to go, according to the FTC’s report.

The authorities noted that the owning family members with meager direct shares try to control the entire business via cross-shareholding between Lotte affiliates.

The number of affiliates under the link totals 67 as of October 2015.

Lotte has a total 86 affiliates, but only eight are public companies, 9.3 percent of the total.

That is the lowest percentage among the 10 largest conglomerates in Korea, according to the FTC.

Hotel Lotte passed a preliminary screening for its planned initial public offering (IPO), according to the Korea Exchange last month.

Lotte Group said that it plans to list the hospitality unit in the first half of this year.

Along with the listing of the key unit, the IPO of other Lotte Group affiliates such as Lotte Data Communication Company, Korea Seven and Lotteria may also take place, the Korea Exchange said in a statement.