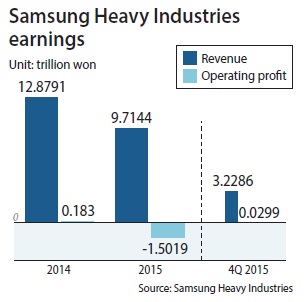 Samsung Heavy Industries made 29.9 billion won ($24.8 million) of operating profit in the fourth quarter of last year, though revenue for the whole year tumbled 24.6 percent from the previous year.

The company announced on Monday that it made 3.2286 trillion won in revenue in the fourth quarter last year, a 32.5 percent rise from the previous quarter, while it made 29.9 billion won in operating profit.

But the company’s annual earnings plunged due to terrible results in the second and third quarters. The company said it made 9.7144 trillion won in revenue last year, a 24.6 percent drop from the previous year.

“In the third quarter, we had to revise our earnings, and that change made us stay in the red for two consecutive quarters due to unpredicted losses in the offshore plant business,” said Kim Dong-Sul, manager of the finance department. “But as the offshore plant business started stabilizing and such unexpected losses weren’t seen in the last quarter, we were able to make the 3 trillion won level in revenue and turn a profit in the operating profit column as well.”

According to financial institutions, losses at Hyundai Heavy Industries (HHI) and Daewoo Shipbuilding & Marine Engineering (DSME), both of which reported about 4 trillion won in losses each through the third quarter of last year, are expected to shrink in the fourth quarter.

“Since the two reflected most of their losses generated from the offshore plant businesses until the third quarter, the losses in the fourth quarter by the two are expected to decline,” said analyst Park Moo-hyun of Hana Financial Investment. “The nation’s top three are expected to turn a profit in the second half at the latest.”

Financial institutions say the nation’s top three shipbuilders - HHI, DSME and Samsung - are expected to turn a profit this year as they reflected most of their losses made in the offshore plant business and the result of winning some profitable businesses, including building LNG carriers, will be reflected in the next quarter.

“We believe that the top three will be stabilizing soon,” said analyst Kim Hong-kyun from Dongbu Securities. “Some unexpected losses could be made, but overall performance, including in basic shipbuilding sectors, will improve as some nations like Iran might make new orders.”

Analyst Park Moo-hyun of Hana also said overall earnings by the three companies will start improving this year. “The companies haven’t won any projects in the risky offshore plant business since 2014,” he said. “The recovery might be slower than we expect but will show signs of stabilizing.”

Some analysts believe the positive predictions may be premature. For HHI, for instance, the balance sheet of the company will improve in the fourth quarter not because they did a better job than in the third quarter, but because of improvements by its affiliate Hyundai Oilbank.

“There are loss-making projects that will run until the end of the year for HHI,” said analyst Jeon Jae-chun of Daishin Securities. “It means that there are many potential risks, and it is too early to state such positive expectations for the shipbuilding companies.”

HHI will announce its 2015 earnings on Thursday, and DSME will release its earnings later this month.