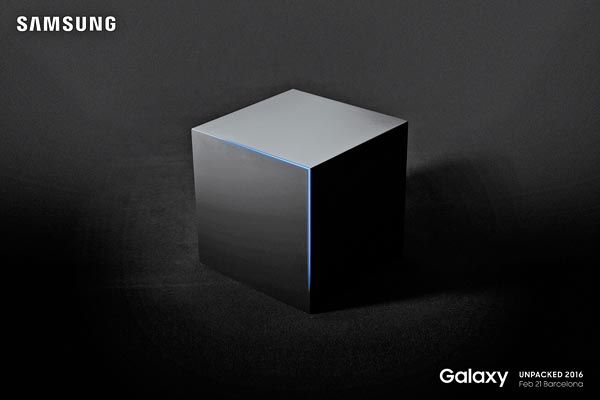 The Galaxy S7 “Unpacked” event invitation does not reveal anything about what customers can expect from the latest smartphone. While a company spokesman remained tight-lipped on a release date, foreign media are reporting a March 11 release. [SAMSUNG ELECTRONICS]

Samsung Electronics confirmed on Monday that it will showcase its next flagship smartphones, the Galaxy S7 and S7 Edge, in Barcelona, Spain, on Feb. 21.

Media invites for the “Unpacked” event include an image of a black cube against a black background, with blue color leaking through the two sides of the box. Except for the colors, the invitation offers no clues about the new features in the next-generation smartphone that Samsung hopes will rekindle its sales streak.

The event will take place at 7 p.m. in Barcelona (3 a.m. Monday, Seoul time) at the city’s international convention center, a day before the Mobile World Congress, the world’s biggest telecom fair, kicks off. The showcase event will be broadcast live at http://news.samsung.com/globalPresentation, Samsung said.

A teaser video for the event shows a man decked out in Samsung’s Gear VR headset, which may indicate a virtual reality feature compatible with the new S7 and S7 Edge phones or a new virtual reality gadget that Samsung is poised to present.

Many foreign Internet media sources have reported that the worldwide release date for the new smartphones will be March 11, though a Samsung spokesman said he “can’t confirm” any date.

Competitors are scrambling to steal the thunder from Samsung by unveiling their latest phones at the Mobile World Congress. LG Electronics is debuting its G5 smartphone five hours prior to Samsung’s event, and China’s rising force Huawei has also set the same date to show off its latest mobile devices.

Huawei’s press conference invitation reads: “Come see how Huawei continues to meet the demands of the next generation of mobile innovation.” The invitation has no image attached.

The formidable Chinese player is expected to take the wraps off four models in its rumored P9 series at the show in Spain. The devices presumably include a standard Huawei P9 model as well as three siblings - the P9 Lite model with mid-range specs, a phablet-sized P9 Max model and a P9 Premium model with high-end specs.

Images and information leaked so far suggest that the Galaxy S7 and Galaxy S7 Edge, set to be shown together, are expected to be more or less the same as their predecessors, the Galaxy S6, S6 Edge and Galaxy S6 Edge Plus, which all boasted a thin design and minimal bezel.

Industry insiders say the S7 will have a 5.1-inch super-AMOLED screen and the S7 Edge may boast a 5.5-inch super-AMOLED display curved on both sides. Both will be powered by either Samsung’s self-developed Exynos 8890 processor or Qualcomm’s SnapDragon 820, depending on the region.

The camera is seen to be the biggest attraction for the new flagship phone that may help the struggling No. 1 smartphone producer widen the gap with its rivals. The company is rumored to have downgraded the resolution for the Galaxy phone’s rear camera from 16 megapixels to 12 megapixels and instead adopting a larger image sensor able to capture more light.

Other new features being talked about include a bigger battery, which will allow the phone to play video for about 17 hours with maximum illumination; the return of a MicroSD slot, which was not seen in the S6 series; and a new rectangular home button.