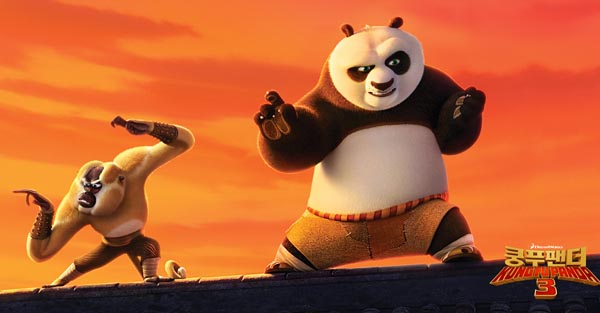 “Kung Fu Panda 3” opened with an impressive 1.4 million tickets sold, safely landing in the No. 1 spot in the Korean weekend box office.

The first installment of the animated film series notched 1.2 million moviegoers during its first weekend in 2008, while the sequel that followed opened with 1.5 million attendees during the same period in 2011.

After the voice actor for the main character, Jack Black, visited Seoul last month and appeared on an episode of the popular reality show “Infinite Challenge” on Saturday as a special guest, “Kung Fu Panda 3” definitely got a boost in theaters over the weekend.

Again featuring a slew of A-list actors for the voices of its characters, including Black, Angelina Jolie and Kate Hudson, the new chapter of the adventure series includes an upgraded villain named Kai, who rises from the realm of the dead and tries to shatter the Furious Five and Po.

Far behind the animated feature was the local drama “Sori: Voice from the Heart,” which sold 179,468 tickets in its opening weekend.

It stars actor Lee Sung-min as a desperate father, Hae-kwan, searching for his long-lost daughter.

With the help of a satellite robot named Sori who can track down any voice to its cellphone and hence its location, Hae-kwan is hoping that at long last his 10-year search will come to an end.

The Korean war film “A Melody to Remember” was spotted in third and added 177,576 attendees to bring its two-week total to a little less than one million, taking in 6.8 billion won.

1 KungFu Panda 3
2 Sori: Voice from the Heart
3 A Melody to Remember