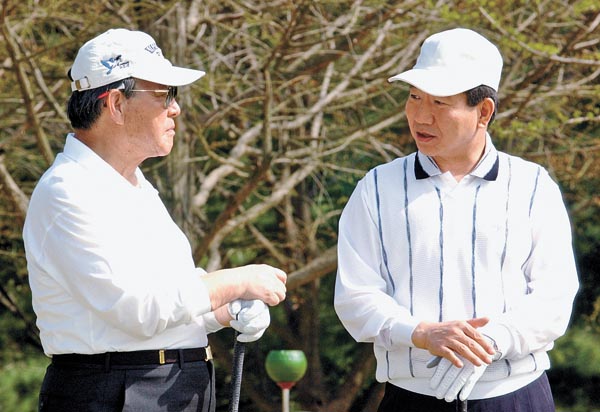 Kim Jong-pil, left, talks to President Roh Moo-hyun during a game of golf on April 17, 2003 at the presidential vacation residence Cheongnamdae in South Chungcheong. [JOONGANG PHOTO]

I think a firm viewpoint on matters of state and the ability to overcome national crises are the top requirements for a national leader. Another characteristic that a statesman should have is humanity. In that regard, former President Roh Moh-hyun had an ability to attract people with his humanity. He first attracted my attention on Dec. 31, 1989 when he grilled former President Chun Doo Hwan during a parliamentary hearing. Enraged by Chun’s remark that an order to shoot civilians in Gwangju on May 18, 1980 was an act of self-defense by a military commander on the scene, Roh threw his parliamentary nameplate at Chun. Watching him throw the nameplate, I figured he was a hot-blooded man.

Roh vehemently opposed the three-way merger of the ruling party, Kim Young-sam’s party and my party and particularly criticized me, saying that I was exacerbating the politics of regionalism. I didn’t feel a bit negative about Roh. I watched him with interest as he was a politician with passion and a straight talker. In the 2002 presidential race, I stayed neutral and didn’t endorse any candidate. Many said that my decision to not support Lee Hoi-chang helped Roh win the election. I thought that if the people chose Roh as their president, that was the path the country must take.

Some expressed concerns that Roh was anti-U.S. or that he embraced leftist views. I didn’t see that as that much of a risk. I thought that once he took office, he would realize he couldn’t afford to run the country with such one-sided views. I was worried about the powerful Grand National Party (GNP) being the opposition, especially after suffering an excruciating defeat it had not seen coming. If the GNP managed to get a parliamentary majority, it was foreseeable that it would block every policy move by the Roh Moo-hyun government. I was concerned that partisan strife could harm national stability. As the leader of the splinter opposition United Liberal Democrats (ULD), I was determined to play my role in easing such partisan strife. 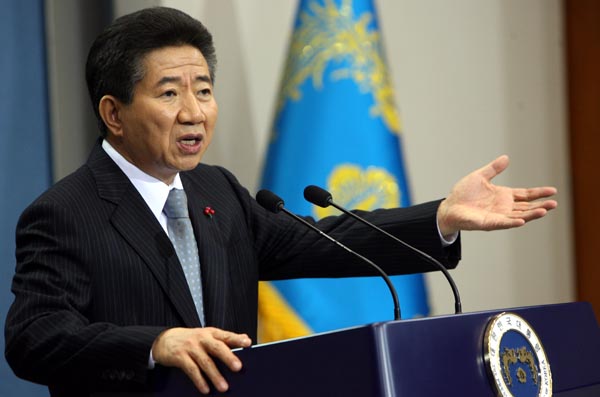 President Roh Moo-hyun gives a speech during a New Year address on Jan. 25, 2007 at the Blue House. [JOONGANG PHOTO]

During his first year in office, Roh often called in leaders of the ruling and opposition parties. In 2003, Roh invited me four times to the Blue House in his efforts to strike a bipartisan deal. On April 17, 2003, he invited party leaders to the presidential vacation residence, Cheongnamdae, in North Chungcheong. The political bigwigs were gathered to discuss the launch of a special prosecutor’s investigation of the illegal transfer of money to North Korea in return for the first inter-Korea summit in 2000.

During the dinner party, GNP acting chairman Park Hee-tae directly confronted President Roh over many political issues and I found myself trying to mediate. It was during that meeting that we reached an agreement to settle the issue of investigation of the illegal transfer of money. Roh came across as a person of innocence who is not politically calculating. He tried to put people at ease and was quick to apologize with a smile when he thought he made a mistake.

Looking back on his five years as president, he did spark many controversies and conflicts in his management of state affairs. While he was a likable person with humanity and humility, many questions lingered over his view of the state. He did not implement the Park Chung Hee Memorial Hall, even though the National Assembly had passed its 20 billion won ($16.6 million) budget. He once said the history of the Republic of Korea is one in which “foul play and prerogatives have prevailed at the expense of justice.” That is a flatly wrong point of view. Korea has a proud history in which it rose from ruins of war to become an economic powerhouse through its own blood and sweat. While former President Kim Dae-jung had an acute sense of a line that he should never cross, I think Roh did not have such a concept when it came to his view of our country.

It might have been his way of relieving the heavy burden of holding office when he made remarks such as, “I don’t think I can’t do my job as president anymore” or when he asked for a new vote of confidence via a national referendum. Those are things he should never have said or done as the commander in chief. A president inevitably faces a test of his leadership. But a president is the ultimate symbol of a nation and its people. Even during times of challenge and doubt, a president must overcome whatever difficulties come along in a five-year term. There is a reason why people say a presidency is the world’s loneliest occupation. I regret that Roh didn’t fully grasp the magnitude of the job he was elected to do by his people.

During a Blue House meeting on Dec. 14, 2003 attended by leaders of all parties, opposition party chiefs asked Roh to act in accordance with the weight of his position. I urged him to retract his proposal for confidence vote referendum. Though I was heading an opposition party, I wanted to give him advice as an elder politician and sought to mediate partisan disputes using my decades in politics. I told opposition leaders, “There has to be a solution to resolve the ongoing political disputes in a meeting with the president. You also have to display respect for the commander in chief.”

It is regrettable that partisan conflict only intensified after the December meeting and the opposition GNP spearheaded an impeachment process against Roh. (It was later struck down by the Constitutional Court).

Roh’s taking of his own life remains a mystery to me. I wonder what pushed him to jump off a cliff in his hometown. I suppose he leapt off the cliff after days of anger, disappointment and anguish. But still, I question what led to his fateful act that day and wonder whether those who were close to him are still working to find out why.