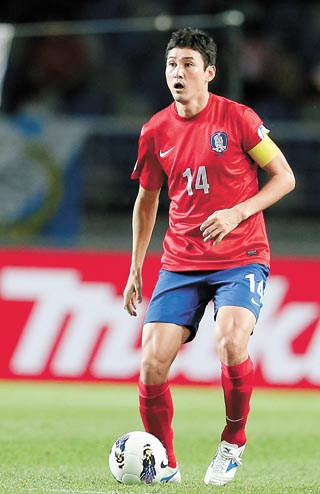 DOHA - Before Korea’s under-23 men’s football team achieved their dream of going to the Summer Games in Qatar, Korean defender Lee Jung-soo already knew that the Middle Eastern country can be a land of opportunity.

The 36-year-old is the first Korean footballer to play in the Qatari League after signing with Al Saad. He joined the club after the 2010 FIFA World Cup, in which he scored two goals for Korea and played in the Round of 16.

Lee went on to do well in Qatar, winning the league and local cups as well as the Asian Football Confederation (AFC) Champions League in 2011. But last Wednesday, Lee and Al Saad decided to end his contract.

“We separated on good terms,” Lee said. “Of course, it makes me sad because I spent so much time here. But I have no bad feelings for the club.”

Looking back at his life in Qatar, Lee, who previously played for Japanese clubs Kashima Antlers and Kyoto Sanga, said it was difficult at first to adjust to Qatar, but he soon began to enjoy himself.

Living with his wife, the former actress Han Tae-yoon, Lee seems to have fallen for Qatar to such an extent that he plans to name their unborn daughter after the country’s capital: Lee Do-ha. The former Suwon Samsung Bluewings, Incheon United and FC Seoul player and his wife are expecting in June.

Ilgan Sports, an affiliate of Korea JoongAng Daily, asked him about his life in Qatar.

Q. Why did you go to Qatar in the first place?

A. Honestly, they offered me a good deal and I thought it wouldn’t be bad to experience life in the Middle East. I selected Al Saad because they are a strong club. If the club was in the bottom cellar of the league, I wouldn’t have signed with them. Back then, my coach at the Kashima Antlers had lived in Qatar for about 12 years, so he told me a lot about life there.

Did you know you would stay this long?

Never. I felt like I was suffocating at first. I had no one to talk with. After a year, I was so tired that I thought about moving to an East Asian club. But after two years, I adjusted to life here and started to enjoy myself. I enjoy fishing as a hobby, going out to the finest restaurants and living well. At one point, a Chinese club approached me with a big offer, but I refused and decided to stay here.

What’s the best and worst part of living in Qatar as a footballer?

The biggest advantage is that you might not feel stressed about away games because almost all stadiums are near Doha, so it only takes about 20 minutes to get anywhere. On the flip side, there are not many fans in attendance here, which lowers the fun and intensity of the matches. Since the population is small and the weather is hot, it’s rare to see a packed stadium.

There was a time you made a big mistake shortly after joining Al Saad. Tell us about it.

When I first joined Al Saad, the team went to train in Italy. After training, I took a shower, but I noticed my teammates were looking at me strangely and seemed embarrassed. I didn’t know what was wrong, so I just finished my shower. Afterwards, my coach called me and told me to wear shorts next time. It turned out that the players don’t take showers with other players completely naked for religious reasons. I had no clue. After I learned, I realized why I had been getting weird looks.

What’s your take on the level of Qatari League?

Honestly, I think local players here are not that professional. Their timing is off, and sometimes they fight with their teammates or coaches. But the skills of foreign attackers are great. Because they came here on high-paying contracts, I feel a lot of pressure defending them.

Many young Korean footballers played in Qatar after you. How does that make you feel?

In 2014, Korea had 10 players in Qatar. It was really good because we could eat together and take trips as a family. I helped them a lot adjusting to life here because I know how difficult it was for me when I first came to this country.

What’s your opinion about Qatar hosting the 2022 FIFA World Cup?

The association and clubs are investing a lot. By 2022, I think the city will be developed like Dubai. Personally, I think having the Word Cup in the winter can bring success. Infrastructure-wise, I think it will be perfect, but the problem is how to deal with attendance and fans here.

How did it feel to become teammates with former FC Barcelona player Xavi Hernandez?

When I first heard that Xavi was coming to our team, I wasn’t really that surprised because previously I played with Raul Gonzalez. Xavi is still a world top class player if you look at his ball-keeping skills and passing.

Did you and Xavi get along well?

We are the same age, so we became friends. He has a good personality. Honestly, I felt that Raul had this celebrity attitude that I found difficult to get along with. But Xavi didn’t have that. He tries to approach players first. I like him and the rest of the players also like him. Maybe that’s why the club gave him the captain’s armband.

You are the first Korean to score after receiving a pass from the legendary Xavi. How did that feel?

I know there were many stories in Korea last year that I scored from Xavi’s pass. That’s when I noticed that Xavi is more popular than Raul, at least in Korea, because I have also scored off an assist from Raul, but no one in Korea has written about that. Looking back, Xavi’s cross wasn’t that special. I just headed it well. (laughs)

Is it true that you can feel the air conditioning on the pitch?

Yes, sometimes I feel it’s too cold. Only our club has an air conditioning system here, so players from other clubs also like to play here. Maybe this is the reason why our players run so much when we are playing at home.

Why did you terminate your contract with Al Saad?

The chairman of the club asked me to stay on as a coach, but I refused because I wanted to play as a player for at least two years. Then, the chairman released me. But he told me when I retire from playing, the club will be waiting for me with a coaching job and asked me to take it. I also told him I will return after two years. We ended the conversation on good terms.

When are you going to retire?

Since February 2013 against Croatia, you haven’t played for the national team. Do you still want to play for the Warriors?

No. I know that the younger players are doing so well that there aren’t any spots left for me to join. In addition, at my age, I shouldn’t be greedy and take a position on the team.