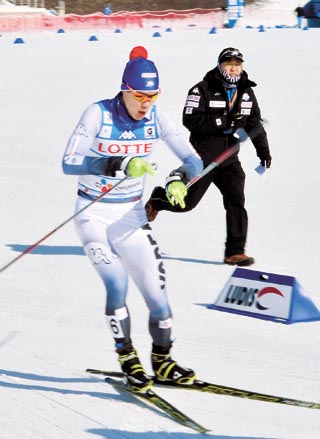 Fifteen different sports will be showcased during the 2018 PyeongChang Winter Olympic Games, but Koreans might find themselves most perplexed with Nordic combined.

That’s because no Korean has ever competed in the sport, a mix of cross-country skiing and ski jumping, at the Olympic level.

But one father-son duo is trying to change that. Park Ki-ho is the coach of Korea’s Nordic combined national team, while his eldest son Park Je-un, 22, is a competitor.

This is the first time a father and son have been on the same Korean national team in a winter sport.

The Parks are something of a sports family. The elder Park represented Korea in the 1984 Winter Games in Sarajevo and the 1988 Winter Games in Calgary, Canada, in cross-country skiing. His eldest son Je-un won three gold medals at the National Winter Sports Festival in 2006 in cross-country and was a ski jump national team member in 2011. His younger brother Je-yun is Korean national team alpine skier.

Their mother, Kim Young-Suk, won a silver medal with the Korean national hockey team at the 1988 Olympic Games in Seoul and a gold medal in the 1986 Asian Games.

“Since everyone is busy on their respective national teams, we get together for about a month every year,” said Park Je-un.

The father Park asked his eldest son to switch to Nordic combined after seeing his son compete in both cross country skiing and ski jumping.

Je-un accepted his father’s suggestion without a second thought.

“If ski-jumping gives you a thrill, cross-country ignites your fighting spirit,” he said. “Why not do both?”

Until the Parks have paved the way for the Nordic combined by beginning to train in May 2013, Korea didn’t have an athlete officially competing in the sport. There were no corporate-funded teams or domestic tournaments to compete in.

Nordic combined is still in its infancy in Korea, as the national team only has two members: Park Je-un and Kim Bong-joo from Korea National Sport University. Until Ki-ho took the top coaching job in May 2014, there wasn’t even anyone willing to coach.

“I was mad and sad when I had to compete in the international events alone,” said Park Je-un.

Every day, the two Parks wake at 4 a.m. to begin training. In the morning, they practice ski jumping, and in the afternoon, they train cross-country. They say that in their training, there’s no room for a normal father-son relationship.

The 51-year-old Ki-ho knows his coaching style is hard on his son, but says he can’t give him special treatment just because he’s his son.

“There were times when I suddenly shouted at him,” Ki-ho said. “But later on, I do regret it.”

In December 2015, Park Je-un finished 24th in the Nordic Combined Continental Cup in Solider Hollow, Utah, and qualified for the World Cup next season. Since the Korea Ski Association hired 44-year-old German coach Till Feist to lead the ski-jumping side of Korea’s Nordic combined last September, Je-un’s skills have been developing quickly.

Last month, Je-un finished 14th in the PyeongChang Nordic combined Continental Cup, but said he still has a ways to go. The Parks goal is clear: finish in the top 10 at the PyeongChang Winter Games.

“We will make big things happen in 2018,” said Park Ki-ho and Je-un. “With the spirit of pioneers, we will put our best foot forward.”