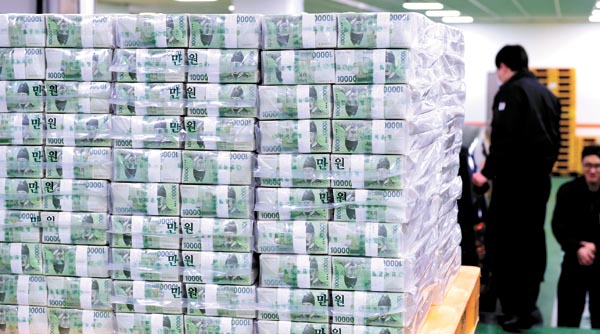 Stacks of Korean banknotes are loaded onto trucks for delivery to commercial banks for the Lunar New Year holiday, or Seollal. It is tradition for adults to give crisp banknotes to children as a New Year’s greeting, also known as sebae money. [JOINT PRESS CORPS]

The government’s goal of 3.1 percent GDP growth this year is being undercut from the very first month of the year, as inflation continues to be low.

According to Statistics Korea on Tuesday, consumer prices rose only 0.8 percent in January compared to a year earlier, falling back below 1 percent and rekindling worries of deflation in the Korean economy.

Largely because of the 2,500 won ($2.07) increase in the retail price of cigarette packs, consumer price growth returned to the 1 percent range in November and rose to 1.3 percent in December, the largest growth in 16 months.

But in January, the growth in prices fell, the agency said.

Another major cause of slower price growth is falling petrochemical prices. In January, the prices of refined oil-based products plunged 10.3 percent compared to a year earlier due to falling international crude prices.

Drops in those products took 0.43 percent off the overall growth in prices.

Housing prices inched up 2.9 percent during the same period, the highest increase since February 2013.

“Despite increases in agricultural products and services, the dampening effect of oil prices was too large,” said Woo Young-je, director of price statistics at the agency.

Excluding the volatile agricultural and oil prices, the core inflation index rose 1.7 percent in January from a year earlier, recovering to the 1 percent range for the first time in 13 months.

“The fall in petrochemical prices shaved 0.73 percentage points from the December inflation rate, but the contribution percentage has been reduced to 0.43, which means the influence of falling oil prices on our overall inflation is being reduced,” Woo said.

The Ministry of Strategy and Finance also said in a report on Tuesday that downward risks on growth, including oil prices, will ease in the coming months.

The ministry cited oil price forecasts by the U.S. Energy Information Administration, predicting the average price of Brent oil to recover to $36.4 per barrel by March and further rise to $42.3 by December.

Along with the 18.5 percent fall in exports in the first month of 2016, such low growth in consumer prices is signaling that the Korean economy is entering a low growth stage, and it will struggle to get near the 3.1 percent growth goal for the year.

The Bank of Korea has set a goal to raise the inflation rate to 2 percent over the next three years, and to 1.4 percent for this year.

Due to the low inflation rate, there are rising expectations among foreign investment banks that Korea’s central bank will cut the benchmark interest rate once or twice this year.

Even though Brent oil may recover, it will be difficult for the inflation rate to reach 1.4 percent this year, BNP Paribas said in a report.

The French investment bank is betting on an additional interest rate cut by the Korean central bank in March.