Finding happiness, and great views, on the roof

Finding happiness, and great views, on the roof 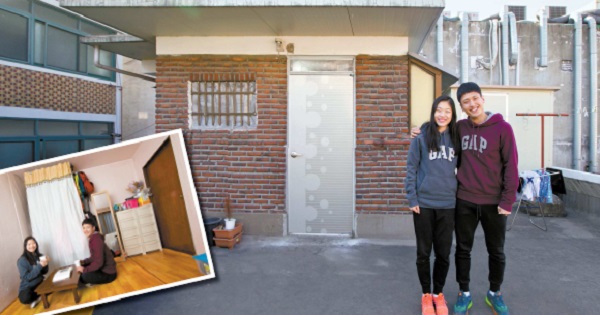 Married couple Park Shin-young, left, and Lee Ju-young said they spend more time together than other couples because they live in a tiny rooftop room. [KIM SANG-SEON, LIM HYUN-DONG]

The small rooms jutting out from the roofs of buildings in Seoul were in most cases initially built for storage, and many were later renovated into tiny apartments.

As a result, the rooftop rooms, or oktapbang, are often cramped and lacking convenient facilities such as full-sized bathrooms and kitchens.

But these small rooms often become havens for young people who cannot afford to rent decent apartments in Seoul.

“One out of five people between the ages of 19 and 34 live in harsh residential conditions such as rooftop rooms, basement rooms or gosiwon,” said Jeong Nam-jin, the secretary general of the Min Snail Union, which advocates for youth housing.

Gosiwon refer to tiny rooms that are about 2 meters (6.6 feet) by 2 meters, barely big enough for one person.

Despite their cramped nature, in pop culture rooftop rooms are often described as romantic places. Lead characters in films and drama series fall in love as they look down at the nighttime view of Seoul.

Are these rooftop dwellings really romantic as described in fiction, or are they just cramped, cold places that are synonymous with poverty? The JoongAng Ilbo listened to the stories of a handful of young people living on the rooftops of Seoul.

Lee Ju-young, 27, and Park Shin-young, 24, first met while working out at a gym for martial arts tricking, which combines martial arts and dance moves.

They fell in love at first sight and registered their marriage three months after their first encounter. They didn’t even have time to think about having a wedding. 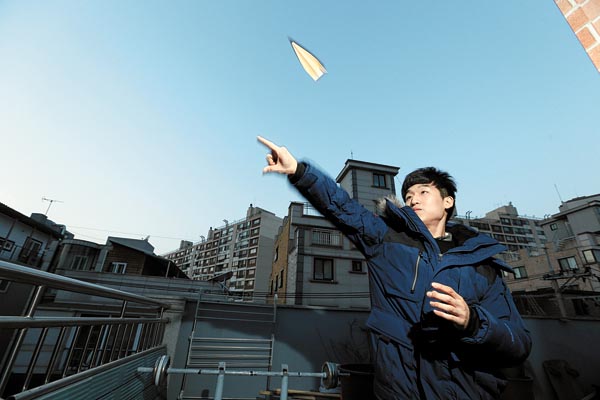 But the couple, who has now been together for three years, soon had to face reality. They spent almost all their money on opening a gym for martial arts tricking in Seongnam, Gyeonggi, and they only had 3 million won ($2,500) between them when they began to search for a place to live.

They eventually opted for a rooftop room in Seongnam, near their gym.

“We couldn’t ask for help from our parents,” Park said. “The rooftop room was the only available choice for us.”

It took nearly a week for the couple to find the rooftop room, where the couple now resides. The deposit for the 23.1-square-meter (249-square-foot) room was 3 million won, plus 250,000 won for monthly rent.

The room becomes crowded with four adults inside, but Lee and Park have found pleasure in their living situation.

The nighttime views of Seoul are beautiful, and the couple planted some veggies like tomatoes and leeks in one corner of the rooftop. The couple sometimes practices taekgyeon, or traditional Korean martial arts, out on the roof at night under the moon and stars.

“Since the room is so small, we run into each other more often than other couples, and it gives us more chances to talk and laugh together,” said Lee.

But life on the roof is not as romantic as it is often portrayed on TV. In summer, the temperature inside soars to 40 degrees Celsius (104 degrees Fahrenheit), and the room is unable to keep out moisture, so the walls get moldy when it rains a lot. In the winter, the two shiver in the cold even when they stay inside.

The couple also has some other complaints about the rooftop room.

“I wish I could have a spacious kitchen because my husband loves to cook, but this kitchen is way too small,” said Park. 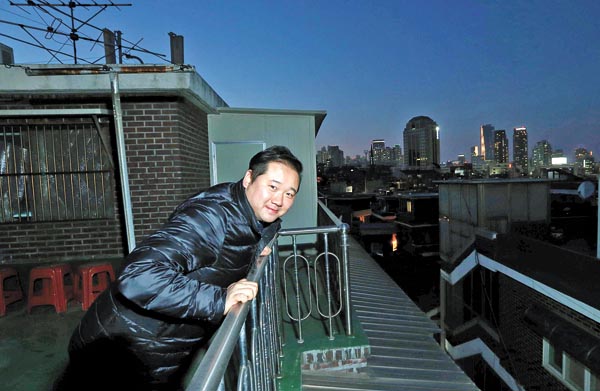 ‘I didn’t want to spend between 20 and 30 percent of my paycheck on housing every month. So I decided to save on housing and enjoy life with the saved money.’ Office worker Lee Pyeong-su can partake in many hobbies, including snowboarding and wakeboarding, while also saving up for his future thanks to his low rent. [KIM SANG-SEON, LIM HYUN-DONG]

But the couple has achieved many things over the past two years while saving money and living in the tiny home.

They held a wedding ceremony last December with the money they saved. They also plan to leave the rooftop room this summer.

“We’ll open a gym in Wirye New Town [in Seongnam] and rent a house with two or three bedrooms,” said Lee.

When asked how the two will remember their first home located on top of a building, Lee said, “It’s a place we rented by ourselves.”

“I think I will remember this place as the old good days when we could be together almost all of the time,” he added, laughing.

College student Kim Young-jun, 25, applied to live in the dormitories when he returned to his studies at Chung Ang University after fulfilling his mandatory military service two years ago.

He thought he would be eligible for a one-room dormitory because of his GPA, but unfortunately it didn’t work out.

So Kim had to find a room near the university. He didn’t want to burden his parents financially, so he looked for a cheaper room. Finally he settled on a rooftop room that is about 16.5 square meters in size.

“I chose this room because I can afford to pay the monthly rent. I was also fascinated by the sports equipment installed on the rooftop by the landlord,” Kim said.

The location was also good. His place is within walking distance of Sangdo Station on line No. 7, near the campus. But Kim could not avoid heat and cold problems of rooftop rooms.

“I turned on the heater every day last winter and I paid 50,000 won for heating, a lot more than usual.”

He asked his landlord to install wall insulation this winter, but it didn’t help much.

“I try to make appointments in order not to stay at home,” said Kim.

But life on top is not always so tough. He is able to dry laundry in the sun and shake the dust off of his linens anytime he wants.

“These are impossible at officetel apartment or studios,” said Kim.

And Kim says he could become an expert in flying paper planes thanks to his rooftop room.

Kim, a physical education major, is particularly interested in the unique sport of flying paper planes.

Red Bull, the energy drink manufacturer, organizes a global competition for the sport every year. Last year Kim made it through the preliminaries for longest distance held in Korea last April, and went on to take part in the world championship in Salzburg, Austria, in May.

A place to party

Lee Pyeong-su, 31, works at a pharmaceutical company and has been living in Seoul for five years.

His first place was a small studio, and then he lived with friends in an officetel before moving to his current rooftop room located in Noryangjin-dong, just south of the Han River.

Lee said he simply didn’t want to pay so much for monthly rent.

It takes a deposit of at least 30 million won and between 500,000 and 600,000 won in monthly rent to live in an officetel in Seoul, but Lee didn’t want to spend all his money on rent. He was also worried the high cost of housing would deprive him of other things in life such as hobbies and marriage.

“I didn’t want to spend between 20 and 30 percent of my paycheck on housing every month. So I decided to save on housing and enjoy life with the saved money,” said Lee.

After moving into the small place, Lee could continue enjoying snowboarding, which Lee has been doing for the past 10 years.

In the winter he visits ski resorts on weekends, and in summer he enjoys wakeboarding and in spring and fall camping.

While it would be impossible to store all his sports equipment in his tiny room, luckily he is able to store it on the roof.

He often invites his friends over and throws parties on the rooftop. By adding a few chairs, the place turns into a perfect party venue. Lee said he enjoyed the Seoul International Fireworks Festival last October with his friends on the roof.

But things get tougher when the mercury drops.

To keep the cold out, Lee put bubble wrap on the windows and he also has thick curtains along with heating pads and rugs.

One winter ritual is wrapping the boiler pipes in thick cloth, but they often freeze anyway.

“I had to warm the pipes up for about 30 minutes with my hair dryer recently,” he said.

But Lee tries to look on the bright side.