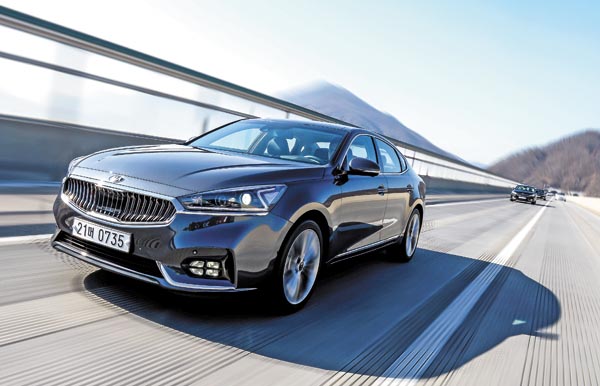 The new K7 sedan on a test drive on a highway to Chuncheon, Gangwon, on Tuesday. [KIA MOTORS]

CHUNCHEON, Gangwon - Kia Motors’ K7 sedan has been a prime symbol of the automaker’s design innovations that began a decade ago under the leadership of Hyundai Motor Group vice chairman Chung Eui-sun.

After a successful debut of the K7 in 2009, the automaker eventually rolled out a second generation of the large-size sedan last month and expects fierce competition in the sedan market.

The revamped K7 is expected to compete against Renault Samsung Motors’ new SM6 sedan, scheduled to be rolled out in March, and Chevrolet’s Impala, which was a hit in the local market last year.

The Korea JoongAng Daily got behind the wheel on Tuesday to check out the performance of the K7 on a 162-kilometer (100-mile) round-trip course from the W Hotel in Gwangjin District, eastern Seoul, to Ladena Country Club in Chuncheon, Gangwon.

To sum it up, the new K7 is a car that offers the joy of driving and comfortable riding quality at the same time.

On the way to the Ladena Golf Club, I checked out the vehicle’s front-wheel eight-speed automatic transmission, which the automaker said was the first among any local companies.

The transmission, which took 38 months to develop and boasts 143 patents, is supposed to offer better performance when changing speed compared to its predecessor, which had a six-speed automatic transmission. It’s also supposed to have better fuel efficiency.

After clearing the city, I immediately increased the speed on the highway, and the Ramda II GDi gasoline engine, which offers 290 horsepower and 35 kilogram-meters of torque, responded smoothly and quickly without making much noise.

The car also offered stable cornering on curves. It feels like Kia has developed a car that can compete with Audi’s A4, which is also a front-wheel base sedan.

On the way back to the W Hotel, I sat in the back and let my partner drive to feel the riding quality of the K7.

The K7 is sold for under 40 million won but has the riding quality offered by mid- to large-size sedans of foreign brands such as BMW and Mercedes-Benz, which have higher price tags.

There were different opinions among journalists on the noise issue. The company said it offers calm driving with a design concept called NVH, which was developed to lower the noise and vibration.

But wind drag generated outside of a vehicle was sometimes quite loud, particularly during high-speed driving, and it felt like it was louder than in other rival models such as Chevrolet’s Impala.

The company said 51 percent of the car’s body was developed with advanced, high-strength steel that is about 10 percent lighter than normal steel to improve safety. This is a feature that has been seen in new cars recently rolled out by both Hyundai Motor and Kia.

Even before its review came out, the K7 made a good start in the local market in terms of sales. The company said it already received 10,000 orders in 16 business days.

“Compared to its predecessor, the number of orders made in the same time period increased by about 35 percent,” said Seo Bo-won, Kia’s domestic marketing director. “As we said before, we are targeting young consumers in their 40s, and we believe that the K7’s driving quality and innovative design will appeal to the targeted group.”