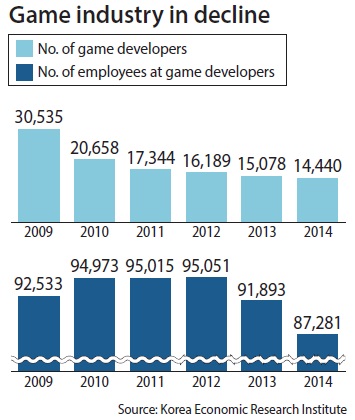 Korea’s game industry was once considered one of the most competitive in the world, but it has regressed under government regulations restricting the amount of time local gamers can play and the types of games that can be created, a report from a private think tank showed Tuesday.

“Korea’s game industry is a very lucrative business that accounts for over half of all exported content by volume,” said Kim Soo-yeon, a researcher at KERI who led the investigation. “But its insiders are increasingly saying the industry is in crisis, as excessive regulations have hindered growth.”

She added that the game industry is the only industry in Korea led by the private sector that has been hugely successful in the global market.

As of 2015, Korea was the world’s fourth-largest market for games after China, the United States and Japan, with annual revenue of $8.3 billion and making up 6.7 percent of the global market.

Between 2000 and 2006, the government was a strong proponent of the game industry. Online games created by Korean developers were making huge contributions to content exports on the back of the nation’s advanced broadband network. The government revised regulations to help the industry in 2003, and a bill dedicated to “boosting the game industry” was introduced in 2006.

But a scandal surrounding the online gambling game “Sea Story” broke before the new act went into effect, and it changed the industry landscape entirely.

Gambling is strictly prohibited by law in Korea, with only one casino offering locals the opportunity to roll the dice. But some were illegally operating online casinos through adults-only game arcades or Internet cafes. Winners of the chance-based online games, including “Sea Story,” were awarded gift certificates that could later be converted into cash, which players used as virtual gambling chips. A nationwide crackdown led to the discovery that some lawmakers and a relative of then-President Roh Moo-hyun were involved in the illegal business, which sent shockwaves through society.

The incident led the government to focus on “restrictions and control” of the game industry rather than expansion, according to Kim.

The Ministry of Gender Equality and Family enforced a regulation in November 2011 that banned players aged 16 or younger from playing games online between 12 a.m. and 6 a.m. “in the name of protecting the youth.”

The Ministry of Culture, Sports and Tourism in February 2014 restricted how people could purchase in-game items to “help users from being trapped in the swamp of addiction.” For instance, a player of so-called web board games such as the traditional Korean card game Go Stop and poker is only allowed to buy up to 300,000 won ($248) in items each month, and if a player loses more than 100,000 won in a single day, he or she is blocked from accessing the game for the next 24 days.

In the meantime, China, which actually referred to games as “electronic heroin” in 2005, has taken advantage of the industry. The Chinese government began offering regulatory support in 2010, which has helped the nation become the industry leader.