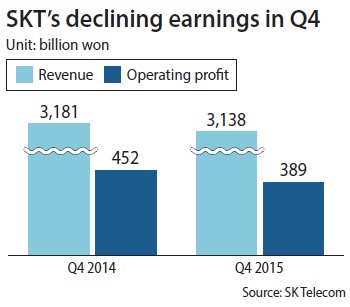 SK Telecom, the country’s top wireless carrier, missed market estimates in the fourth quarter due to narrowing profit margins caused by discounts on monthly bills and the elimination of membership fees.

The telecom company on Tuesday posted 389 billion won ($321 million) in operating profit for the quarter ending in December, a 14.1 percent decrease from a year earlier. The figure is below the average estimate of 480 billion won, according to market tracker FnGuide.

SKT cited the newly introduced 20 percent discount on the monthly bill as a major factor in the reductions.

The Ministry of Science, ICT and Future Planning announced the discount measure in 2014, following the implementation of the Mobile Device Distribution Improvement Act, which capped smartphone subsidies that telecoms could offer customers at 330,000 won.

In response to criticism by consumers, who suddenly had to pay more for their new device, the ministry introduced the monthly discount option.

SKT’s decision to drop the initial membership fee at the end of 2014 also reduced the company’s earnings.

The telecom giant attributed the reduced yearly earnings to spending on compensation for early retirees and increased costs from expansion in its subsidiaries.

The company vowed to boost future earnings by focusing on the development of its own smartphones, like the Luna and Sol, and its media platform business.