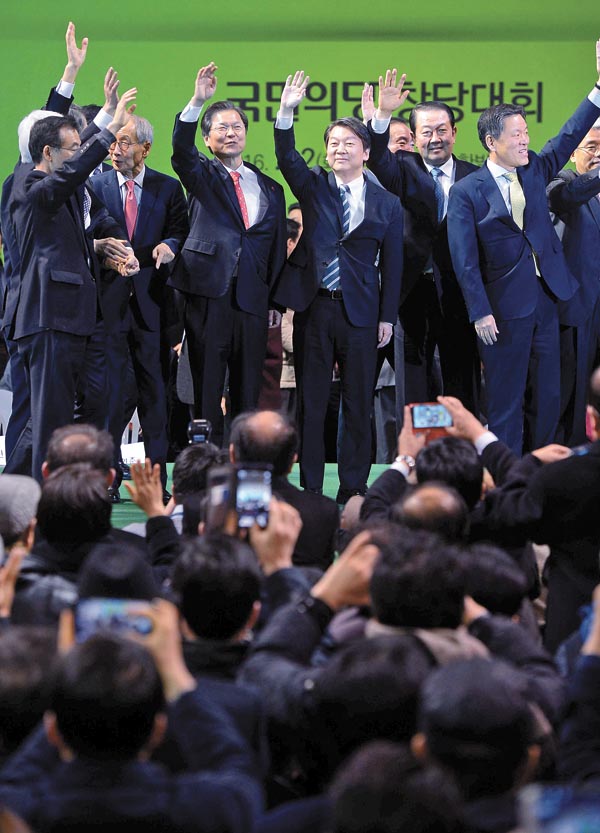 Reps. Ahn Cheol-soo and Chun Jung-bae, co-chairmen of the newly-launched People’s Party, and Rep. Kim Han-gill, chief campaign manager for the new party, stand onstage as they formally launch the political party in a gymnasium in Daejeon on Tuesday. [NEWSIS]

The People’s Party held an opening convention at the Hanbat Sports Complex in Daejeon in the afternoon. Rep. Ahn and Rep. Chun Jung-bae were named co-chairmen of the party.

It took just 48 days for Ahn, a software mogul-turned-lawmaker, to form his own political party. The political maverick who co-founded the main opposition party in 2014 abandoned it after a year. When he left the Minjoo Party of Korea on Dec. 13, 2015, Ahn said he wanted to break the country’s two-party system controlled by reactionary conservatives and obsolete progressives.

The decision to hold the ceremony in Daejeon and not in Seoul was an “expression of the party’s resolve to win the central region to become a national party,” according to Choi Won-sik, the party spokesman. In the 1997 presidential election, the United Liberal Democrats, led by Kim Jong-pil with a strong base in the Chungcheong region, proved its influence by contributing to the victory of Kim Dae-jung through an alliance.

“With the determination of someone standing on the edge of a precipice, I bet my all on the People’s Party and the upcoming election,” Ahn said Tuesday in his acceptance speech as the party’s inaugural chairman.

Rep. Chun, whose base is in the Jeolla region, said he will fight against the current duopoly of power for the sake of democracy. He also vowed to promote reforms, mutual prosperity and political participation.

The People’s Party on Tuesday also named four members of its Supreme Council, including Rep. Joo Seung-yong, its floor leader.

During the first week of January, the People’s Party won 21 percent approval in a Gallup Korea poll and 20.7 percent in a Realmeter survey. Three weeks later, its rating went down to 12 percent and 13.1 percent, respectively.

The People’s Party’s ambition to become a so-called negotiation bloc has also stalled. It currently has 17 lawmakers, three shy of the required 20. A negotiation bloc is given the right to negotiate legislative calendars and entitled to larger state subsidies.

The party’s other urgent task is recruiting fresh faces to run in the 122 districts of Seoul, Incheon and Gyeonggi. “Only when we field candidates in all districts of the capital area can we kill speculation that we will eventually form an electoral alliance with or merge with the Minjoo Party,” an official of the People’s Party said.

Analysts said the survival of a third party is anything but assured.

“Since the 1987 democratization, a culture of extreme confrontation dominated politics under the current presidential system,” said Park Won-ho, professor of political science at Seoul National University.