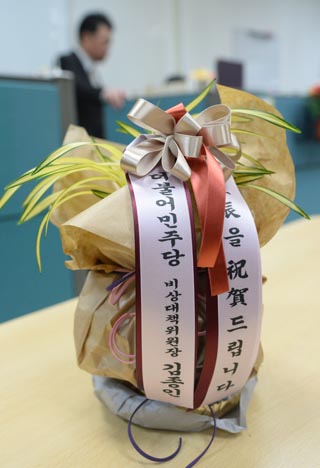 The Blue House on Tuesday rejected the orchid sent by Kim Chong-in, the interim leader of the main opposition Minjoo Party of Korea, in honor of President Park Geun-hye’s birthday. [NEWSIS]

The Blue House on Tuesday rejected a floral arrangement sent by the main opposition in honor of President Park Geun-hye’s birthday, only to accept it later following speculation over the dismissal.

The president celebrated her 64th birthday on Tuesday with a luncheon at her residence that was attended by her presidential secretaries.

Kim Chong-in, the interim leader of the main opposition Minjoo Party, sent Park an orchid to mark the occasion, though the gesture was immediately rebuffed by the Blue House.

“Kim told us to send the orchid, so Rep. Park Soo-hyun, Kim’s chief of staff, contacted the senior presidential secretary for political affairs [Hyun Ki-hwan] to make the delivery,” said Kim Sung-soo, the Minjoo Party spokesman. “But the Blue House replied that it would not accept it.”

“Politics is politics, and doing the right thing is something else,” said Rep. Park. “We thought it was the right thing to do … before the Lunar New Year holidays [next week].”

According to the main opposition, it informed Hyun’s office of its intention to deliver the flower at around 9:07 a.m. At 9:54 a.m., the rejection was made via telephone.

“We offered one more time, reminding them that the president had once sent an orchid as a gift to our party’s former leader Moon Hee-sang,” said Kim, the spokesman. “But the Blue House turned it down again. We reiterated that this was a gift from the head of the main opposition party, but the Blue House repeated that it was being politely declined.”

On April 11, 2013, President Park sent an orchid to Moon, the opposition’s former leader, on the eve of his birthday.

The spokesman said it was the first time that the opposition party had sent flowers to the president to mark a birthday.

Kim Chong-in, who was appointed as the interim leader of the Minjoo Party earlier this month, is one of the president’s former allies. However, the veteran economist, who designed Park’s campaign pledges based on “economic democracy,” bitterly parted with her after she took office, complaining that she failed to follow through with her policies.

Later in the afternoon, Blue House spokesman Jung Youn-kuk said that the president had reacted furiously to Hyun’s decision, which after the Blue House contacted the opposition to convey its belated acceptance.

“Hyun politely turned it down because he thought it was inappropriate to receive the gift when important bills are still pending at the National Assembly [due to protests from the opposition],” Jung said. “The president was later informed about the decision and strongly reprimanded him. Spokesman Kim is on his way to deliver the plant to Presidential Chief of Staff Lee Byung-kee. “We will accept it.”