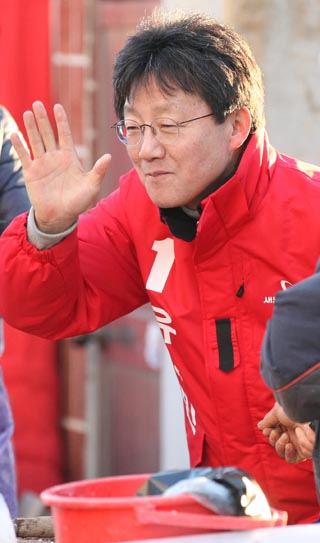 A battle between Park Geun-hye loyalists and their adversaries to win ruling party tickets for the April general election has started in the president’s political stronghold of Daegu.

Rep. Yoo Seong-min, former floor leader of the Saenuri Party and a leader of political foes of the president, registered his candidacy for Daegu’s Dong B District on Monday. The registration took place as Rep. Choi Kyung-hwan, former deputy prime minister for the economy, started touring the hometown of the president to support her loyalists’ campaigns.

Yoo has a bitter history with Park. Once a devoted loyalist, Yoo served as Park’s chief of staff in 2005 when she was the chairwoman of the Grand National Party, the predecessor to the Saenuri Party. However, the two became estranged after he expressed disagreement with her plans to overhaul the conservative party in 2012. He did not actively participate in her presidential campaign.

After a 13-day war with the president in 2015, Yoo became a symbol of Saenuri politicians who are at odds with Park loyalists. He was forced to step down from the floor leader post after Park issued a lengthy, angry criticism of his “politics of betrayal.”

The latest skirmishes began when Choi directly attacked Yoo on Saturday. When Yoo visited the campaign office of Ha Chun-soo, a Park loyalist, for Buk A District of Daegu, Choi said Daegu voters must elect Park allies in the upcoming election.

Park loyalists want to expand their influence in the ruling party and the National Assembly by replacing lawmakers in Daegu and North Gyeongsang with the key allies of the president. In Daegu Dong B District, where Yoo registered his candidacy for re-election, Lee Jae-man, a Park ally, is also seeking a nomination.

Choi was scheduled to visit campaigns of other Park allies throughout this week. On Monday, he visited the campaign offices of former trade minister Yoo Sang-jick and former senior presidential civil affairs secretary Kwak Sang-do. Choi was scheduled to visit the campaign office of Yoon Doo-hyun, former senior presidential secretary for public affairs, on Tuesday. Today, he will visit the campaign offices of former home affairs minister Chong Jong-sup and Choo Kyung-ho, former minister of government policy coordination. Choo is running for the Dalseong District of Daegu, the former constituency of President Park.

As the Park allies form an electoral alliance, Yoo made clear that he will continue his fight. On his Facebook page, Yoo wrote, “All state authority emanates from the people,” quoting from the constitution.

During his visit to Kwak’s campaign office for Daegu Jung and Nam Districts, Choi once again stressed that Park loyalists must be elected to support the president. “The people who vowed to help the president are running this time,” Choi said. “The voters must elect lawmakers who can support the success of the president.”

A Saenuri lawmaker said the competition between Choi and Yoo will likely continue even after the general election.

“The two both have the same determination that they want to support the president,” said Rep. Kim Sang-hoon of Daegu Seo District. “But they just have different styles. Their competition to become the leader of the Daegu and North Gyeongsang region will likely continue.”