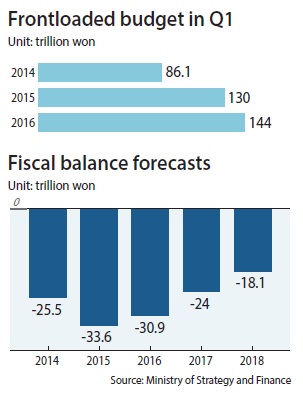 In the face of a constant flow of dire economic indicators, the government has introduced a stimulus package that involves spending almost one-third of the total annual budget in the first three months of the year.

The Ministry of Strategy and Finance announced on Wednesday it will frontload 144 trillion won ($115.1 billion) from its annual budget in the first quarter, 6 trillion won more than it initially planned. The move is intended to help boost the sluggish economy including the biggest fall in exports, slower growth in inflation and negative consumer sentiment.

Among state-run corporations, companies such as Korea Electric Power Corporation will increase their first-quarter investment to 5 trillion won, which the government hopes will become a leading example of expanding investments in the public sector.

In total, the government will add 21 trillion won worth of fiscal resources to its initial plan for the first quarter as a shot in the arm for the sagging economy.

Compared to the same period of 2015, the government is going to spend 14 trillion won more.

“It is the largest government spending for the first quarter alone,” said Min Seok-ki, an official in charge of budget execution at the Finance Ministry.

The 144 trillion won is 30.1 percent of the government’s total budget for this year.

“The government will mobilize all financial resources and tools to restore the domestic and export sectors in order to create as many new jobs as possible,” said Yoo Il-ho, deputy prime minister for economy and finance minister, at a meeting on economic affairs held at the Seoul Government Complex in Gwanghwamun.

Yoo said earlier he has no plan to make an extra budget, but decided to spend more of the budget to try to boost the economy as early as possible.

Just last month, the minister said in the parliamentary confirmation hearing, “If there is a rapid turnaround in the growth trend, or domestic demand suddenly shrinks, we will come up with some other measures, but at the moment, we don’t see any signs of that.”

The main reason the minister made the change seems to be the January exports record, which posted the largest fall of 18.5 percent in six and half years. Furthermore, the consumer price index retreated to below 1 percent, implying a sluggish recovery in domestic demand.

Considering that the Korean economy grew 0.6 percent in the fourth quarter of last year, it is likely that such a slow growth trend is expected to continue in the first quarter of 2016.

If the current situation continues, it will be impossible for the government to reach 3.1 percent in GDP growth as it has planned.

“Including the January exports, major economic indicators turned out to be worse than expected,” said a ministry official.

“The government decided to take preemptive actions, because if the situation continues it could lead to job creation problems as the graduation season nears in February.”

As the Lunar New Year holidays near, the government will encourage department stores and large duty free shops to throw discount events with the goal of attracting Chinese tourists. Tax refunds will be made immediately at all duty free shops from this week.