KDB’s Hong gets spot at AIIB

KDB’s Hong gets spot at AIIB 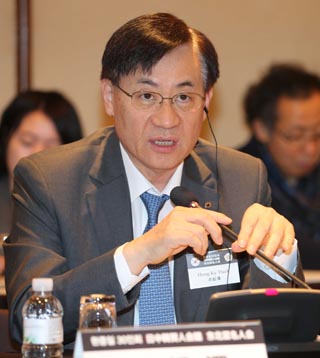 Hong Ky-ttack, the chairman of KDB Financial Group, has been nominated as vice president of the China-led Asian Infrastructure Investment Bank (AIIB).

According to the Ministry of Strategy and Finance on Wednesday, the board of executive directors of AIIB has finally approved the nomination. Hong will take office as the bank’s chief risk officer (CRO), one of five vice presidents of the new international body.

Jin Liqun, president of the AIIB, recommended Hong as one of the five candidates on Jan. 20. Hong will be officially appointed within the week to serve the position in Beijing for three years.

It is the first time since 2003 that a Korean figure has assumed such a high-ranking position at an international organization. Shin Myung-ho, former deputy finance minister served as the vice president of Asia Development Bank from 1998 through 2003.

Since Korea is the fifth-largest stakeholder with a 3.81 percent stake in the new institution, there have been high expectations that a Korean figure would take one of the five vice president positions

The AIIB was officially launched on Jan. 16. The institution plans to finance up to 10 projects and lend $1.2 billion this year. Annual lending will be expanded to $3.5 billion by 2018. The first project of the AIIB will be determined in the latter half of this year.

The KDB chairman will oversee analysis of financial investment and risk for the organization. He will also participate in the institution’s decision-making body for core investments.

“As a Korean has assumed one of the crucial positions at the AIIB, it will help increase Korea’s participation in infrastructure development projects in Asia,” the ministry said in a statement.

The 64-year-old economics professor was appointed chairman of state-run KDB Financial Group in April 2013. He will complete his term in March.