New book touts K-beauty for everyone, not just Koreans

New book touts K-beauty for everyone, not just Koreans 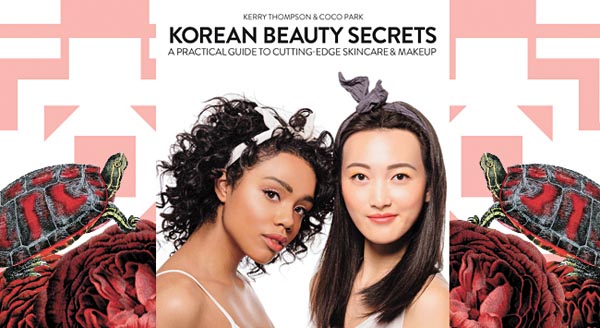 “Korean Beauty Secrets: A Practical Guide to Cutting Edge Skincare and Makeup,” published in November by a pair of beauty bloggers, is available for purchase online on Amazon.com and other major booksellers. [Screen capture]

It took the West 20 years to catch onto the BB cream revolution that has flourished in Korea. If it took that long, what else is it missing?

Coco Park, a Montreal-based aesthetician and founder of beauty blog The Beauty Wolf (www.thebeautywolf.com) says Western women have plenty to learn about properly caring for skin and should look to the Korean beauty realm for answers.

Don’t let the name fool you, Park isn’t Korean at all. She stumbled across K-beauty while dating her now-husband Richard Park, who is Korean-American.

Their philosophy in the book released in November is to assure people that “K-beauty products and routines are revolutionary and not to be intimidated. It works for anyone, from anywhere, with any skin type.”

“Women of color have told me they are especially excited to be represented in the book. Some I’ve spoken to have previously felt shut out of the K-beauty movement before,” Park says, referring to the amount of Korean products containing whitening properties.

“They feel validated and that’s the biggest compliment for me.

“In Canada now, sheet masks have started popping up everywhere. So have BB cushion compacts; European companies are starting to get in on the action. I think they’re a perfect, self-contained delivery system that give a beautiful finish.”

As a skin cancer survivor, Park is notably passionate about the benefits of applying sunblock - a daily, integral part of the Korean skincare routine, but one that is bypassed in countries that favor being tanned, like the United States and Australia. “Skin is our largest organ and its health should be viewed as a priority, not a frivolous luxury,” she says.

Park was exposed to K-beauty when she visited Richard’s parents’ house for the first time, where she became quickly “intrigued by all the beautiful jars and tonics that lined the bathroom vanity.”

“My mother-in-law and sister-in-law were of course very into Korean skincare,” Park says. “From there I delved into the world of Korean cosmetics. My first BB cream was from Missha and soon as I tried it, I knew that this world was for me. I was hooked on K-beauty for life.”

According to Park, the West’s approach to skincare is flawed. “Western women tend prioritize ease and simplicity above all else. Much like going to the gym, you are not going to get the same results with something easy as you would with a solid, comprehensive program. The same goes for skincare.

“When it comes to makeup, I think the West is more concerned about covering up flaws with a lot of complexion makeup, as opposed to using products that physically treat the skin.”

Park says another key difference is that “Korea’s beauty market thrives on innovation, it’s so fast paced.” Her point supports fashion magazine Marie Claire’s claims of Korea being “about 12 years ahead of the United States in terms of [beauty] technology.”

Culture also plays a vital role. “In Korea, commenting on the state of someone’s skin isn’t taboo,” Park says, whereas in the West, it’s often offensive to call someone out on poor skin.

When asked what her top three favorite products are currently, Park struggled to choose.

“My favorites change every few months, but at the moment I love Blithe’s Tundra Chaga Pressed Serum, which is a unique take on traditional serum. It has a custardy texture, plenty of antioxidants, and it leaves your skin plump and hydrated.

“Second, the Slowganic Cleanser from Recipe by Nature. It’s gentle with a perfect 5.5 pH.

“And as for the third, the Total Aging Care Body Oil by illi; it’s the first thing I grab when I exit the shower. The product sinks right in, hydrates waterlogged skin and smells heavenly.”

Above all, Park advises women to “take the time to treat yourselves, realize that you deserve it.”