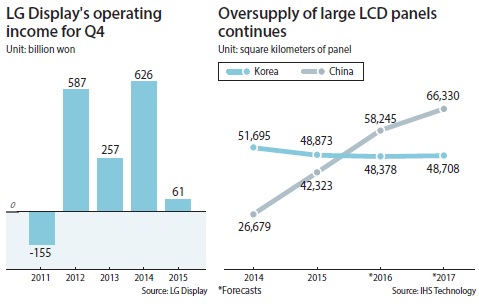 Rumors are spreading that iPhones will feature curved displays by as early as 2018.

If they do, Apple will probably need to ditch the liquid crystal diode (LCD) panels used in current models for next-generation organic light-emitting diode (OLED) panels.

In addition to being flexible, OLED panels are thinner, offer richer colors and use less power than LCD alternatives.

This would be good news for Samsung Display, which already supplies some of Apple’s LCD panels and has extensive experience producing OLED displays for archrival Samsung Electronics.

But for LG Display, which also supplies LCD panels to Apple, this could present more of a problem.

Samsung Display is set to invest up to 4 trillion won ($3.3 billion) this year and another 5 trillion won next year to be prepared to roll out over 30,000 of the panels every month.

Apple’s non-disclosure agreements with its suppliers bar Samsung from publicly confirming the information. But a display industry insider familiar with the situation said that “Apple seems to appreciate Samsung’s ability to mass-produce flexible OLED displays, which has been already proven through its Galaxy smartphones.”

Samsung, already a key supplier of LCD screens for Apple, has been using OLED screens in its flagship Galaxy smartphones since 2010 and accounts for over 90 percent of the market for small to midsize OLED panels.

But this most recent deal puts LG Display in a tight spot.

Although the company has been supplying many of the panels for iPhones, iPads and even Apple Watches, it has yet to seal a contract with Apple for its upcoming iPhone, according to a manager at the display maker.

This is despite a flurry of media reports in late December claiming the company was “on the verge” of making a deal.

LG Display Vice Chairman Han Sang-beom’s visit to Apple headquarters in Cupertino, California, on Jan. 9 to have a one-on-one meeting with Apple COO Jeff Williams after the Consumer Electronics Show in Las Vegas increased anticipation of a deal.

But no update has been heard in the nearly one month since, even as many analysts have said Apple is asking both LG Display and Samsung Display to increase their production capacity for OLED displays.

LG Display could use the business, as it released a gruesome earnings report last week.

The company’s fourth-quarter operating income nose-dived 90.3 percent year on year to 60.6 billion won, following a tumble in global LCD panel prices because of an oversupply.

The oversupply in LCD panels is the result of Chinese competitors’ efforts to pump up their production capacity and increase market share.

Small-size OLED panels have been a weak spot for LG Display, and a supply deal with Apple could do much for the ailing company.

LG vowed to spend 50 to 60 percent of its entire investment earmarked for this year - estimated at between 4 and 6 trillion won - on production facilities for OLED panels, which analysts say has to do with LG staying ready for a deal from Apple.

OLED technology was used in 18 percent of all smartphone displays worldwide in the third quarter of 2015 and will be used in more than one out of four smartphones by 2020, IHS said.