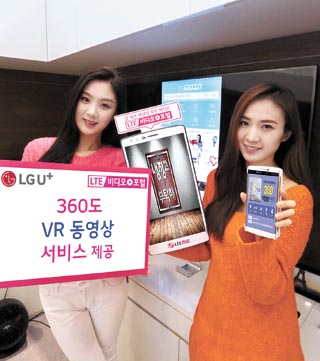 When people watch TV shows, they are usually restricted to seeing a small fraction of what’s actually happening on the set.

LG U+ is rolling out new video content for its mobile streaming platform LTE Video Portal, which will be shot with a unique camera that allows viewers to adjust their perspective as the action rolls.

The nation’s smallest telecom said Wednesday that it will offer the immersive option for select TV shows, music videos and fitness tutorials, becoming the first telecom in Korea to do so.

The move is in line with the company’s strategy to carve out a niche in video streaming services as the wireless cellular network business becomes ever more saturated.

The videos are similar to the “360 videos” unveiled by Facebook in late 2015, which offer a similar kind of virtual-reality experience without requiring extra gear such as a headset.

To provide the service, LG U+ forged partnerships with domestic virtual-reality start-ups including Mooovr (pronounced as mover) and Verest.

The start-ups will apply their cutting-edge camera systems to existing TV programs.

The first show will be “Please Take Care of My Refrigerator,” JTBC’s popular cooking competition show.

LG U+ will provide its first version of the show on Feb. 15, while immersive music videos and fitness videos will be available today.

“We will have a special crew shoot the scenes to provide the immersive version,” said Kim Jong-han, a public relations official at LG U+.

“So with the 360-degree camera system, users of our platform can watch other guests’ reactions that are not featured on TV,” he said.

The company said it will not charge viewers extra to access the TV shows, and that people can view content on the platform regardless of their own telecom company.

LG U+ said last year that it aims to lead the market by concentrating on video content, with then-CEO Lee Sang-chul stating video entertainment will be the company’s primary focus.