Lotte founder in court over his mental state

Lotte founder in court over his mental state 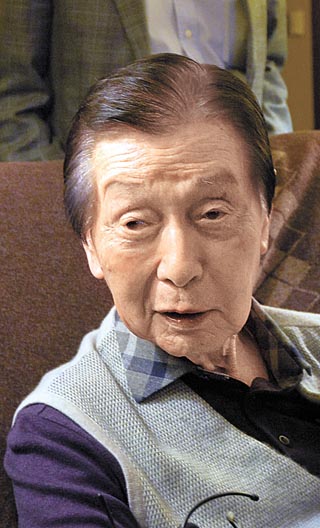 Shin Kyuk-ho heads to his car in his wheelchair after appearing in court at Seocho District, southern Seoul, on Wednesday. [NEWSIS]

A hearing to determine the mental state of Lotte founder Shin Kyuk-ho began in Seoul Family Court on Wednesday, a move that could have a significant impact on the ongoing fraternal battle between the Lotte scions.

The 94-year-old patriarch appeared in court at Seocho District, southern Seoul, on Wednesday to testify, but he did not answer questions by a throng of reporters outside the courthouse.

Chairman Shin Dong-bin of Lotte Group, the younger son of the founder, has accused his older brother Shin Dong-joo of exploiting his father’s unstable mental condition to become his successor.

But the eldest son has countered that the patriarch’s mental health is sound and that his decisions should be respected.

“The fact that the founder appeared in court shows his willingness to prove himself,” said a representative of SDJ Corporation, a unit founded by the eldest son.

Lotte Group declined to comment because the case is ongoing.

Last October, the founder said he appointed Shin Dong-joo as his business successor, though Shin Dong-bin is currently at the helm of Lotte operations in both Korea and Japan.

If the court recognizes the need to appoint a guardian and rules that the senior Shin is unable to behave in a rational manner, the decision would support the Lotte chairman.

Conversely, the opposite ruling would favor the stance of Shin Dong-joo, who is waging a legal battle against the younger brother to nullify his leadership over Lotte Group. He currently serves as chairman of SDJ Corporation after being stripped of his post as vice chairman of Lotte Holdings, a de facto holding company of Japan’s Lotte business.

Key figures of SDJ Corporation accompanied the patriarch, though the two sons did not attend the first hearing.

The ruling is crucial in the high-stakes feud over control of the retail group. However, neither Shin Dong-bin nor Shin Dong-joo filed for legal guardianship. Shin Jeong-sook, the 78-year-old younger sister of the founder, brought the case to court, raising the need to choose a legal guardian.

In the filing document, she reportedly listed the names of a potential guardian, including Shin Dong-bin, Shin Dong-joo, Shin Young-ja, daughter of the founder, and Hatsuko Shigemitsu, the founder’s wife.

Shin Dong-bin submitted a document that backs the sister’s claim while Shin Dong-joo opposes the appointment of a guardian.

Despite conflicting views among sons, daughters and relatives, those in legal circles say that the founder testifying on his own behalf about his mental state would likely weigh the most in court.

Court hearings for legal guardians typically take up to six months, but observers believe the decision in the Lotte case may come within the first half of this year due to the significance of the case.