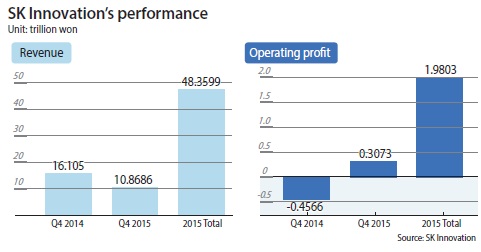 The nation’s leading oil refiner announced Wednesday that it had 48.3599 trillion won ($39.655 billion) in revenue last year, a 26.6 percent drop from a year ago, and an operating profit of 1.9803 trillion won compared to a 224.1 billion won operating loss the previous year, the first yearly loss in the company’s 37 year history.

“Profit increased in the oil business, but operating profit dropped from the previous quarter due to some unexpected expenses,” a spokesman of SK Innovation said during a press briefing.

“Quarterly revenue dropped from a year earlier, but the company was able to turn a profit as the overall global oil demand increased while international oil prices were falling, which improved our oil refining margin.”

After reporting record operating profit in 2011, the company went into a downturn in the next few years after it expanded its oil refining facilities overseas. Then, it was hit by the impact of oil price declines in 2014 and reported a loss for the first time that year.

Industry insiders say SK Innovation was able to turn the situation around as profitability in the oil refining business improved. The company said it made 1.2991 trillion won in operating profit from oil refining, which accounts for about 65.6 percent of its entire operating profit. The company reported a 990 billion won loss in that business in 2014.

“Oil prices continued to fall but were relatively stable compared to 2014, and that reduced losses from goods in inventory,” a spokesman of SK Innovation said.