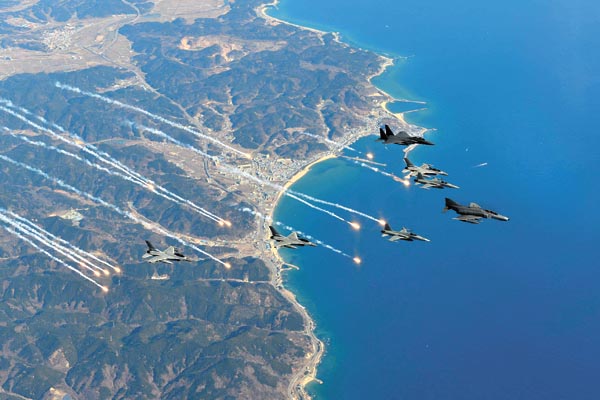 South Korean fighter jets participate in the “Soaring Eagle” drill on Wednesday from an air base in Cheongju, North Chungcheong. The fighter jets practiced an attack on missile launch sites. [KIM SEONG-TAE]

Deeply strained inter-Korean relations are about to freeze over as the Park Geun-hye administration has concluded that the North has no intention of backing off from its nuclear and missile brinkmanship.

“The government has reached the conclusion that the North has no intention of improving relations with the South this year,” a senior Seoul official told the JoongAng Ilbo on Wednesday. The conclusion was made last week at a meeting hosted by Kim Kwan-jin, head of the National Security Council (NSC), the source said.

“At the meeting, an assessment was made that the North’s recent escalation of tensions using its nuclear and missile programs is more serious than its earlier provocation using land mines last August,” the source said. “The government has realized it has no reason to put efforts into restoring inter-Korean relations if the North fires a long-range missile following the nuclear test.”

North Korea announced Tuesday that it will launch an Earth observation satellite on a rocket later this month. The launch is widely considered a disguised test of ballistic missile technology. International organizations, including the London-based International Maritime Organization, were informed by the North that the launch will take place between Feb. 8 and 25 and between 7 a.m. and noon Pyongyang time. 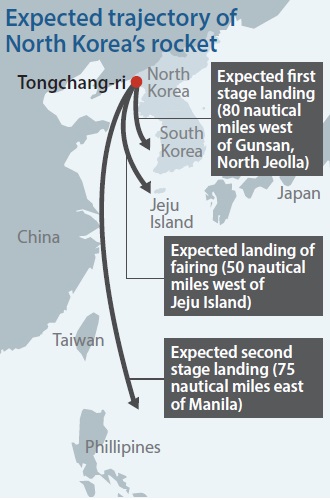 The announcement came less than a month after the North’s fourth nuclear test. Pyongyang said it had successfully tested a hydrogen bomb on Jan. 6, and the UN Security Council is currently drafting punitive measures in response.

The NSC held a meeting Wednesday morning at the Blue House to discuss the latest missile threat. Following the meeting, Seoul warned Pyongyang that it will face severe consequences if it follows through with the plan.

“Announcing the plan while the United Nations Security Council is discussing sanctions for its fourth nuclear test is clearly direct defiance of the international community,” said Cho Tae-yong, deputy head of the NSC. He said any launch using ballistic missile technology is a clear violation of earlier UN Security Council resolutions and advised Pyongyang to give up the plan.

While Cho did not elaborate on the “severe consequences,” government officials told the JoongAng Ilbo that the Park administration is mulling the option of shutting down the Kaesong Industrial Complex, the last surviving inter-Korean project.

“Frankly, we do not have an effective card to counter the North’s repeated provocations,” a government official said. “We are deciding whether we must keep going the Kaesong Industrial Complex, where $100 million in cash are supplied annually as wages for North Korean workers.”

According to a government official, the administration also decided to shelve plans to ease economic and investment sanctions on the North. The current sanctions, imposed after the North’s sinking of the South’s Cheonan warship in 2010, bar any new investments or exchanges with the North, and the government was planning to ease them after a high-level agreement in August last year. Pyongyang denies sinking the Cheonan.

A source well-informed about North Korea told the JoongAng Ilbo that Pyongyang’s young ruler, Kim Jong-un, has made clear that he is not interested in improving ties with the South.

“In his New Year’s address, Kim said he will meet with anyone who wishes for unification,” the source said. “But internally, he said he won’t deal with the Park administration.”

As Seoul prepares for the possibility of a complete halt in inter-Korean relations, skepticism grew here about Beijing’s ability to influence Pyongyang. The announcement of the missile launch plan was a clear snub to China, the North’s main ally. Beijing’s Special Representative for Korean Peninsula Affairs Wu Dawei arrived in Pyongyang on Tuesday.

A top South Korean official said the North kept China in the dark about its plan to announce the launch.

“We need to accurately verify the order of events, but China didn’t tell us [about the North’s announcement] when we had consultations before Wu’s trip to Pyongyang,” he said. “It is an educated guess that Wu was sent without knowledge of the announcement.”

Another senior official of Seoul’s Foreign Ministry said China is in a humiliating situation.

“The North conducted the nuclear test despite China’s warning not to,” he said. “And China told it not to conduct a missile test, but the North still announced the plan. China’s pride must have been hurt seriously.”

Unlike with the three previous nuclear tests, Pyongyang did not inform Beijing in advance about its fourth nuclear test on Jan. 6.

Intelligence officials said the North is acting on its own politically oriented schedule. The 74th birthday of late leader Kim Jong-il falls on Feb. 16, and Seoul officials said the long-range missile test was intended to coincide with that anniversary.

A failed missile test in 2012 took place two days before the 100th birthday of North Korea’s late founder, Kim Il Sung, on April 15. Later that year, five days before the first anniversary of Kim Jong-il’s death on Dec. 17, the North fired a three-stage rocket, the Unha-3, and successfully put what it claimed to be a satellite into orbit. The United States confirmed that an object was launched into space.

The North has consistently developed its nuclear and missile capabilities over the past years to threaten the U.S. mainland. With progress in miniaturization of nuclear warheads, Pyongyang’s possession of a nuclear-armed intercontinental ballistic missile is Washington’s nightmare.

“The North is declaring that it will go its way no matter what others say,” said Kim Han-kwon, a professor at the Korea National Diplomatic Academy. “It probably decided it will stage provocations all at once because it will face sanctions anyway. Because the United States and China failed to agree on punitive measures for the latest crisis, the North seems to be certain that China doesn’t want the collapse of the Kim regime. And that significantly reduces any obstacle to more provocations.”

The United States condemned the North’s plan for the launch, stressing that it underscores the need for tougher action against the North.

“We’re not asking for some sort of preemptive resolution here to a launch that hasn’t occurred. But the announcement of it itself is just all the more indication that the international community needs to get behind tougher action against them,” U.S. State Department spokesman John Kirby said Tuesday.

Kirby stressed that a different approach toward the North is needed, and that China and the United States have agreed to it, mentioning Secretary of State John Kerry’s recent trip to Beijing.

“Foreign Minister Wang Yi acknowledged that China did have a role to play, that they do have a measure of influence over Kim Jong-un and the North, and that they agreed that the international community should do more to hold the North to account, and that they would be willing to explore options about doing more,” Kirby said.

China said Wednesday it is extremely concerned about the North’s plan. In a press briefing, Foreign Ministry spokesman Lu Kang told North Korea to exercise restraint. “North Korea must refrain from the launch and act prudently,” he said, urging Pyongyang not to take steps that will escalate tensions on the Korean Peninsula.

Japan vowed on Wednesday to shoot down any North Korean missile fired over its territory.

According to a Japanese government statement, an order was issued on Jan. 28 to the Japanese Self-Defense Forces to destroy any projectiles if it is confirmed that they will fall on Japanese territory.

According to Tokyo, the order is effective until Feb. 25, the last day of the North’s planned launch period.

Japanese Prime Minister Shinzo Abe also urged the North to give up its plan. “If the North goes ahead with the launch, it is a grave provocation and a clear violation of the UN Security Council resolution,” he said. “We will work with South Korea and the United States to strongly pressure the North to stop its plan.”