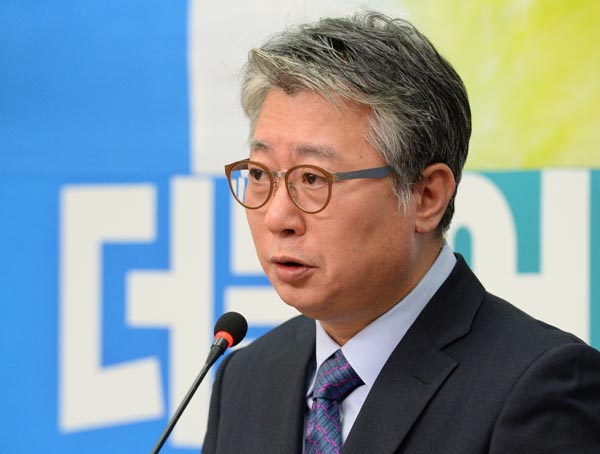 A former Blue House secretary to President Park Geun-hye, who once oversaw the department for civil service discipline, announced Tuesday that he had joined the country’s main opposition party.

With just months until April’s general election, Cho Eung-cheon’s transition from ex-presidential aide to opposition figure dealt a serious blow to the Blue House and the ruling Saenuri Party.

His decision to join the Minjoo Party of Korea, he explained Tuesday, came after persistent requests from former opposition leader Moon Jae-in.

Cho, who now runs a seafood restaurant, is perhaps mostly known for his involvement in the biggest political scandal to hit the Park administration.

The former presidential secretary for civil service discipline stepped down from his position in December 2014 after being linked to the leak of a confidential report concerning alleged behind-the-scenes power brokers in the Blue House.

The state document alleged that Chung Yoon-hoi, a former aide to President Park during her days as a lawmaker, had continued to wield considerable influence in politics, discussing state affairs and human resource matters with a tight 10-member circle that included three of the president’s secretaries.

The scandal was triggered following an exclusive report on the leak by the local daily Segye Ilbo in November 2014.

Prosecutors charged Cho of violating the Presidential Records Management Act, claiming that he passed on confidential state documents concerning Chung to the president’s younger brother, Park Ji-man, who is also the chairman of EG Group, an electronic materials producer.

He was acquitted, however, in October.

Cho’s decision marks the first time one of Park’s key aides has openly opposed her, and sparked fierce controversy in the Blue House and the political establishment.

A government official criticized Cho’s service at the Blue House, calling his intentions “impure and political.”

The Saenuri Party’s spokesman also denounced the Minjoo Party, claiming that the move was indicative of jitters and impatience ahead of the general election with interim leader Kim Chong-in, formerly the architect behind President Park’s 2012 election pledge for “economic democracy,” now running operations.

However, in an exclusive interview with JoongAng Ilbo on Tuesday evening, Cho denied claims that he was acting as a political sniper.

Cho said that though his political career had been “conservative,” his choice to join the party was “neutral,” adding that he understood that the Minjoo Party needed to recruit him to allow for a complete overhaul.

“The way that I’ve walked, the footsteps that I’ve left and the view that I’ve seen are all different[from the party],” he said. “I believe I can contribute to the Minjoo Party to turn to the one-eyed into two-eyed.”

Still, the former aide refrained from discussing whether he planned to run in the election.

Cho, a former prosecutor and lawyer, entered politics in 2011 after Park’s presidential campaign team recruited him.