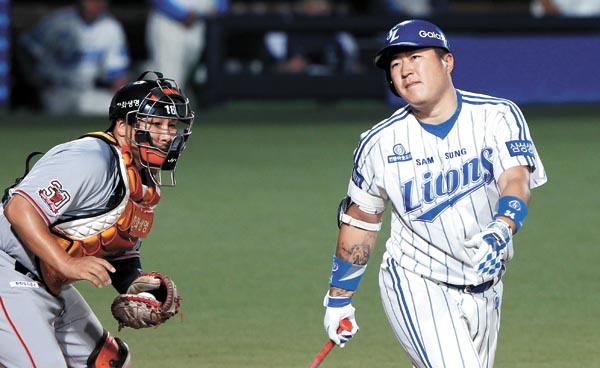 Samsung Lions slugger Choi Hyoung-woo had career-high in home runs and RBIs last year in the Korea Baseball Organization (KBO), but it wasn’t a satisfying season for the 32-year-old.

Choi, who bats left and throws right, last year played all 144 games for the Lions, which was the fourth time in his career that he completed the season without missing a game. With a .318 batting average, he had his personal best of 33 home runs and 123 RBIs. Choi hit .302 with runners in a scoring position.

Despite the numbers, Choi said he has some regrets.

“Until halfway through the season, I was going good, but from June, it started to shake,” Choi said to Ilgan Sports, an affiliate of Korea JoongAng Daily. “I was on a pace to get more than 40 home runs, but in the end, home runs, RBIs, and batting average all didn’t satisfy me.”

Choi, who topped home runs, RBIs and slugging percentage in 2011, said that his quick pace from the start of the season actually turned out to backfire on him.

“I started to lose my concentration when I had 100 RBIs,” said the outfielder. “I just collapsed ... and it was too late to recover.”

Choi, who captained the Lions in 2013 and 2014, especially struggled in the Korean Series when the team needed him the most.

The 2008 KBO Rookie of Year only delivered two hits in his 21 appearances at bat in the championship series. In the end, the Lions lost to the Doosan Bears.

“If I could have focused well in the end, we would have had an unbelievable fifth straight championship,” he said. “I couldn’t make it up for us to win the title. My personal records went average, while the team failed to win.”

Choi first joined the Lions in 2002 as a catcher, but was released by the Daegu-based club in 2005. However, his impressive performance with the National Police Agency baseball club got him re-signed with the Lions.

Since 2011, Choi has been the cleanup hitter for the Lions. From 2011 to 2015, Choi played 643 games, which is second best after Lotte Giants infielder Hwang Jae-gyun who featured 650 games. During that period, the Jeonju-born player was the fourth batter in the hitting lineup for 2,168 times at bat, while collecting .317 batting average, 137 home runs and 516 RBIs.

Choi, the three-time KBO Golden Gloves winner, will become a free agent after this season and expects to get a bigger deal, but that isn’t what he is concerned about right now.

“I’m not going to play good baseball thinking about becoming a free agent,” he said.

“I just want to play baseball comfortably. I’m sorry to the fans for last year, but this season I will end my slump and do my best.”