Groups urged to speed up deals

Groups urged to speed up deals 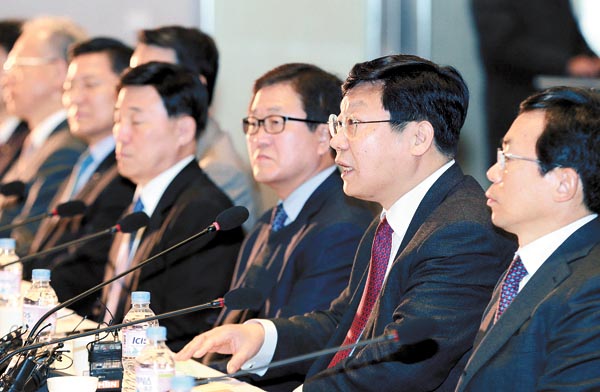 Trade Minister Joo Hyung-hwan, second from right, speaks at a meeting with representatives from the top 30 conglomerates at the Federation of Korean Industries in Yeouido, southwestern Seoul, on Thursday. [NEWSIS]

The government has urged the nation’s 30 largest conglomerates to accelerate investments in future businesses this year to help lift the country’s sagging economy.

It is the first time in two years that the Ministry of Trade, Industry and Energy has gathered the presidents of all 30 groups, prompted by the nation’s January exports, which dipped to the lowest level in more than six years.

Trade Minister Joo Hyung-hwan held the high-profile roundtable session with the heads of the country’s conglomerates, ranging from Samsung and Hyundai Motor Group to SK and Lotte, at the Federation of Korean Industries (FKI) in southwestern Seoul on Thursday.

He emphasized the major companies are the main pillars of Korea’s industrial growth and their investment is urgently needed to strengthen the nation’s industrial competitiveness.

“All my policy capabilities will be focused on helping the private sector so that its aggressive investments bring tangible achievements as early as possible,” Joo said at the meeting.

“Korea’s economy is at the knee of a curve. Please speed up [the investment and business restructurings] so that the national economy can overcome the difficulties.”

However, FKI Vice Chairman Lee Seung-cheol demanded that the government act more aggressively in deregulation initiatives “because it is difficult for us to innovate business structures and foster future-oriented businesses simply with market demand.”

Joo promised the ministry will roll out specific restructuring guidelines and standards on oversupplied industries, including shipbuilding, steel and petrochemical, as soon as the legislature passes the One-Shot Act, which went through the National Assembly on Thursday.

He vowed that the government will ease rules on energy efficiency requirements for Internet of Things (IoT) technology-enabled home appliance products such as air conditioners, televisions, laundry machines and set-top boxes in a bid to allow more IoT-enabled products to be commercialized as soon as possible.

He also said the government will cut business screening processes for Hyosung Group and other carbon fiber makers in a bid to expedite financial support on their R&D.

Businesses called on the government to ease regulations to allow private-run commercial banks like Shinhan and KEB Hana to finance large-scale overseas projects when the companies enter the Iranian market. The Export-Import Bank of Korea has been the only institution involved in large overseas projects. Joo said he will discuss the issue with other ministries.

The conglomerates said the government should raise its voice at the Asian Infrastructure Investment Bank to enable Korean companies to fairly compete with Chinese rivals. They worried the Chinese-led group may be more prone to give business to Chinese companies.

Refineries suggested that regulations be eased to allow group purchases of crude oil, as the method can reduce per-barrel price. Retailers and the logistics industry demanded the ministry ease the weekend operation limit on large supermarkets to allow conglomerates to get involved in some small consumer goods and food manufacturing business.