Celine Dion will not sing at husband’s memorial

Celine Dion will not sing at husband’s memorial 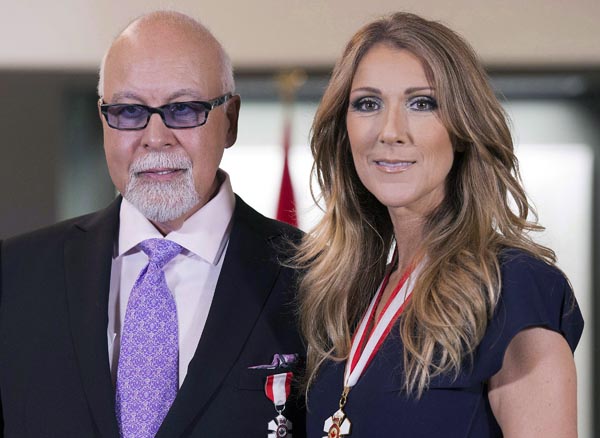 This July 26, 2013, file photo shows Canadian music star Celine Dion, right, and husband Rene Angelil posing for photos after being decorated with the Order of Canada in Quebec City. Caesars Palace will host a memorial for Angelil, the husband and manager of Celine Dion credited with launching her career and long-standing residency on the Las Vegas Strip. [AP/NEWSIS]

LAS VEGAS - Celine Dion will address the audience, but she isn’t expected to sing at the memorial in Las Vegas for Rene Angelil, her husband and manager credited with launching her career.

Angelil died on Jan. 14 after a long battle with throat cancer in the suburban Las Vegas home that he shared with Dion and their three children. He was 73.

The Wednesday memorial will be held at The Colosseum at Caesars Palace starting at 7 p.m., with a livestream available online for the two-hour broadcast.

Event organizers said the singer with one of the most popular voices in the world will speak at the event celebrating Angelil’s life.

The widow didn’t speak publicly at his Jan. 22 funeral at the Notre-Dame Basilica, the site of their wedding 21 years ago. Their eldest son, Rene-Charles, gave the eulogy to a crowd of nearly 700 people before Angelil was buried at the Notre-Dame-des-Neiges cemetery in a private graveside ceremony. The family on the previous day had spent nearly seven hours greeting fans and mourners at a public visitation at the same Montreal church.

At the Las Vegas memorial, the mother and son will be joined by Angelil’s children from previous marriages and his brother, Dion’s publicist Kim Jakwerth said. There will also be music and speeches from guests ranging from Dion’s longtime agent and friends in the music business to Caesars executives and a Las Vegas charity.

Born in Montreal to a Canadian mother and Syrian father, Angelil was a former singer-turned-manager who discovered a 12-year-old Dion and mortgaged his house to finance her first album.

He guided her career most of her life, most critically as she learned a new language to sing in English to become a widespread international success. By the late 1990s and 2000s, her soaring voice had become dominant on the radio. The theme from “Titanic,’’ the smash “My Heart Will Go On,’’ has been her defining hit, and she has had other hits that have sold millions of copies around the world.

Angelil was constantly seen by her side. He is also credited with launching Dion’s residency at Caesars in 2002, which helped shaped the current entertainment landscape on the Las Vegas Strip.