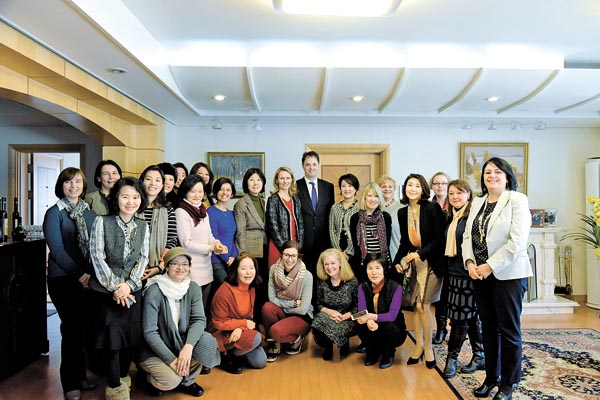 Hungarian Ambassador to Korea Gabor Csaba, center, and his wife, Edit, gather Thursday with members of the Seoul International Women’s Association during a cultural promotion event at their residence in Yongsan District, central Seoul. [CHOI IN-YOUNG]

Hungarian Ambassador to Korea Gabor Csaba and his wife, Edit, hosted a cultural promotion event on Thursday at their residence in Yongsan District, central Seoul, for members of the city’s largest international women’s organization.

Some 25 members from the Seoul International Women’s Association (SIWA) participated in the latest Cultural Connection convention, which for more than eight years has introduced foreign cultures to women from the local community.

Mrs. Csaba, who also works for the Hungarian ministry of foreign affairs, is an avid member of SIWA.

An hour-long lecture by the ambassador touching on the country’s history, geography, food and tourism was followed by a standing buffet of rich Hungarian cuisine, prepared by Mrs. Csaba. Among the dishes were gulyas (goulash) soup, salami, pogacsa (a type of bread) and traditional sweets.

“Hungarians can be traced back to the eastern side of the Ural Mountains, and from there, they migrated westward, hunting along the way and living the life of nomads to finally reach today’s location,” said Mr. Csaba. “Hungary is the heart of Europe.”

The series of battles between the medieval Kingdom of Hungary and the Ottoman Empire has made modern day Hungarians “rebellious in their genes,” the top diplomat added.

One key reason why his country matters, said Mr. Csaba, is that despite the country’s small size, it has astonished the world with its great cultural and scientific contributions.

Hungary has one of the highest numbers of Nobel laureates per capita, with 18 prize winners among a population of 10 million; most work in the fields of chemistry, medicine and physics.

Some of the country’s fanciest wine cellars play an essential part in tourism there nowadays, Csaba said, adding that they “know how to entertain” visiting foreigners.

The internationally acclaimed Tokaji Aszu (a naturally grown sweet dessert wine), fiery red wines like Bull’s Blood of Eger (Egri Bikaver) and other white wine varieties are among the most popular, he added.

“Hungary has produced wine for over 500 years,” Mr. Csaba said. “Along with the capital, Budapest, [the country’s] spa culture, Lake Balaton and other hidden gems, are what make Hungary a great place to visit.”

When a SIWA member later asked about the similarities between Korea and Hungary, the envoy was quick to reply that respect for elders was a major commonality.